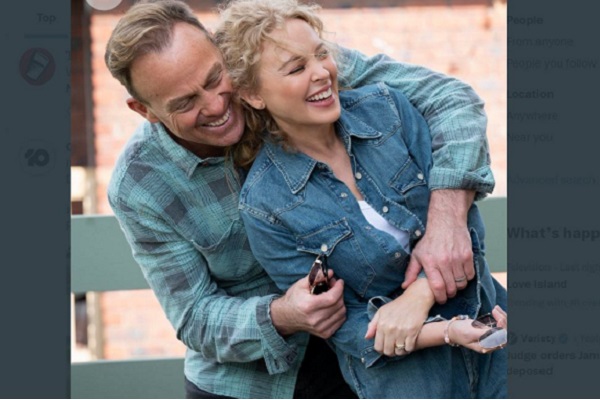 Ahead of their return to Neighbours, Kylie Minogue and Jason Donovan have re-released their hit single, ‘Especially For You’.  The pair re-released this track to mark the soap’s finale.

The track also arrived weeks on from that iconic episode of the show, which saw Kylie Minogue’s character (Charlene) and Scott (Jason Donovan) get married.

Donovan and Minogue’s return to the show will be aired in Neighbours’ final ever episode on July 29.

Back in March, it was confirmed that Neighbours would be axed, after Channel 4 ended its deal to air the show in Britain.

“Now we ARE back together on ‘Neighbours’, a limited run of ‘Especially for You’ with @JDonOfficial will be available on vinyl and cassette on 5th August to bring back more 80s memories!!”, she wrote.

Now we ARE back together on @neighbours, a limited run of ‘Especially For You’ with @JDonOfficial will be available on vinyl and cassette on 5th August to bring back more 80s memories!! 🤍 https://t.co/4OhI7HirAD pic.twitter.com/B8z2cG19Ti

There will be a number of limited copies of the track available on vinyl and cassette from August 5. The single is also available to pre order.

Back in June, Kylie Minogue added in a previous interview that it was “very sweet” to return to Neighbours alongside Donovan.

She said, “I wanted to be reminded of being that 19-year-old again, when I would get into my Datsun and fang it to Vermont South or the Network Ten studios at Nunawading,’ [in Melbourne where the show is filmed]”.

‘It was very sweet to be with Jason and to think, “Wow, we’re still around””.

Kylie was also one of many celebrities to pay tribute to Neighbours, after news of its cancelling came to light.

“I’ll be forever grateful for the experience and the friends I made on ‘Neighbours’”, she said back in March. “We had no idea how big the show would become and how passionately viewers would take it to heart. Pure love”.