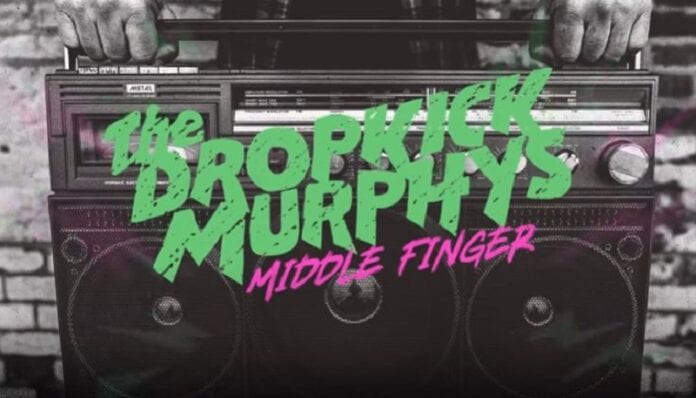 Dropkick Murphys have announced their new album entitled ‘Turn Up That Dial’ and have shared the first single from the new record ‘Middle Finger’.

The new release will be the band’s 10th album and will be available via Born and Bred records on April 30. It is available to pre-order here.

Ken Casey, Dropkick Murphys co-frontman has said he hopes it will take “people’s minds off their troubles.”

“We’re so fortunate and grateful to be in the position to share a little happiness in our own way.”

“Our gratitude levels are off the chart. Twenty five years ago, somebody bet me 30 bucks I couldn’t form a band with three weeks’ notice to open for his band. As kids, we’d never been out of New England and here we are – we’ve made 10 records and have been all over the globe. If there’s a message to this album, it’s ‘put your fist up and play it loud.’”

You can check out the full track list and new single below.

“We’ve all done plenty of lamenting, so the main goal was to keep this fun. The darker the times got, the harder we fought to uplift with this music. Whatever we’re potentially giving to fans, trust me, they’re giving it to us tenfold. Now, turn up that fucking dial.”

Dubbed ‘Still Locked Down’, it will air at 11pm Irish time and it is free to watch but fans are encouraged to make a donation to support their crew.

Casey said “Instead of charging for tickets, we’re going to ‘pass the virtual hat’ so you can donate what you’d like to help support us in our efforts to keep paying our employees.”

During the first lockdown last year, Dropkick Murphys were one of the first bands to host a live stream event. They played at an empty venue in Boston on St Patrick’s Day last year.

In the summer, the band played at Boston’s Fenway Park with an appearance from Bruce Springsteen beamed in via video.

Royal Blood Wanted To Dress Up Like Bono For Band Aid...

The Cure Announce UK Gig… With Some Very Special Guests!