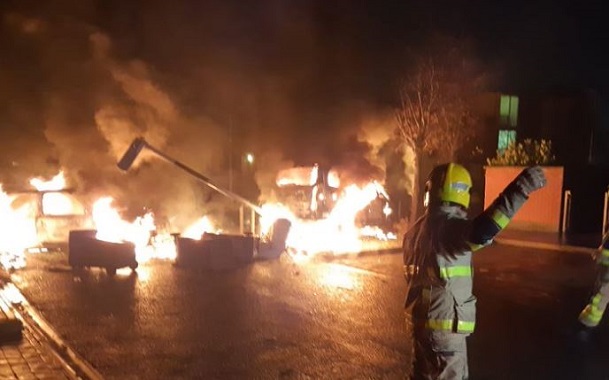 Dublin Fire Brigade were called to incidents of cars being set alight as over 140 fires were recorded.

The Dublin Fire Brigade were called out to multiple fires last night and early this morning.

Firefighters from North Strand fire station had to put out two blazing two cars on fire in Darndale off the R139 and were met with anti-social behaviour.

Trucks and containers were set alight in Kildare.

Overnight we worked with our colleagues in Kildare at a site where trucks & containers were alight. In addition to the firefighters from Kildare fire service, one fire engine from Dublin attended #teamwork pic.twitter.com/08hhKu1sZ9

According to Breaking News, 144 fire incidents were recorded since 12:00am this morning. Dublin Fire Brigade said that when they were called to “Tara St at a bin store on fire in the city centre. Our crews encountered anti-social behaviour with rocks & fireworks”

Pub Owners Anger At Prospect Of Staying Shut ….. If Restaurants...