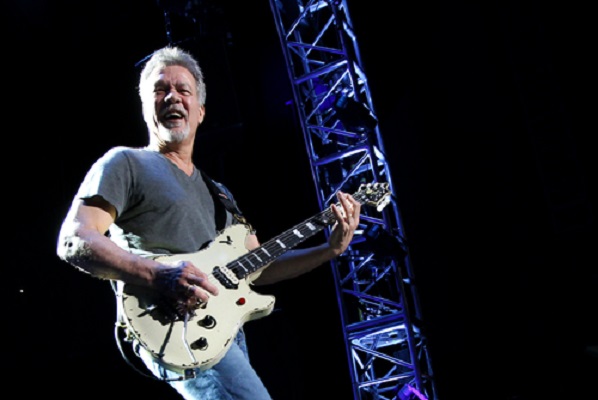 Plans to honour late guitarist, Eddie Van Halen with a memorial are taking place Pasadena, where the group played nearly 50 years ago.

Eddie died on October 6th at the age of 65, following his lengthy battle with cancer of the mouth. Fans left tributes to him at his childhood home in Pasadena. They also left some on Allen Avenue.  A street where he and brother Alex scratched their band’s name into the sidewalk when they were teenagers.

A meeting is taking place on Monday, October 26th to plan the memorial. As Blabbermouth report, an agenda report for the meeting discusses a number of possible proposals for the memorial.

“Since his passing, Pasadena has received several requests and suggestions from the community to do or name something in Eddie’s [honour] to [recognise] both his local connection to Pasadena, as well as the impact that his artistry had on music,” the report said.

The report continues to say several requests have been made to name things in his honour, given the band’s connection to Pasadena.

“A strip of curb on North Allen near the Van Halen home on Las Lunas street has served as a make-shift memorial site since his passing, helping to prompt a broader discussion of a local memorial. Over the past week, staff has contemplated other potential sites for a memorial such as renaming of a street or alleyway or the placement of a public monument in an area associated with the late musician.”

Tomorrow’s meeting of the council will discuss what type of memorial will be most appropriate to honour the late musician.

Ozzy Could Have Joined Van Halen

News came last Friday that Eddie once asked Ozzy Osbourne to join Van Halen. Van Halen and Black Sabbath went on tour together in the ‘70s. While paying tribute to the late guitarist earlier this month, Osbourne says every time he saw the star “it was fun”.

Ozzy revealed on his latest episode of his SiriusXM radio show Ozzy’s Boneyard that Van Halen had “phoned me up one time, asked me if I wanted to sing in his band”.

Osbourne was one of many paying tribute to the musician, calling him “a force to be reckoned with”.

Osbourne added: “[I] could sit and watch Eddie Van Halen play guitar all day,” he said.

Check out 20 of Eddie’s Top Solos.