Home Classic Albums You Can Listen To Elvis Costello And The Attractions’ ‘Armed Forces’ From... 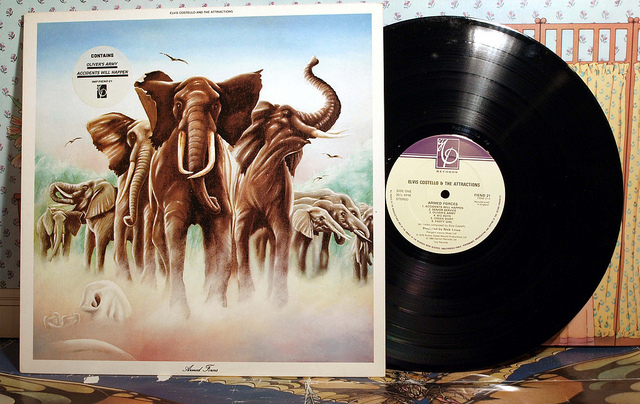 Armed Forces is the third album by Elvis Costello and his second with the Attractions. It was released on the 5th of Janurary 1979.

After releasing and touring the intense This Year’s Model, Elvis Costello quickly returned to the studio with the Attractions to record his third album, Armed Forces. In contrast to the stripped-down pop and rock of his first two albums, Armed Forces boasted a detailed and textured pop production, but it was hardly lavish

However, the more spacious arrangements — complete with ringing pianos, echoing reverb, layered guitars, and harmonies — accent Costello’s melodies, making the record more accessible than his first two albums. Perversely, while the sound of Costello’s music was becoming more open and welcoming, his songs became more insular and paranoid, even though he cloaked his emotions well.

Many of the songs on Armed Forces use politics as a metaphor for personal relationships, particularly fascism, which explains its working title, Emotional Fascism. Occasionally, the lyrics are forced, but the music never is — the album demonstrates the depth of Costello’s compositional talents and how he can move from the hook-laden pop of ‘Accidents Will Happen’ to the paranoid ‘Goon Squad’ with ease.

Some of the songs, like the light reggae of ‘Two Little Hitlers’ and the impassioned ‘Party Girl’, build on his strengths, while others like the layered ‘Oliver’s Army’ take Costello into new territories. It’s a dense but accessible pop record and ranks as his third masterpiece in a row.

The Rolling Stones: It’s Only Rock and Roll