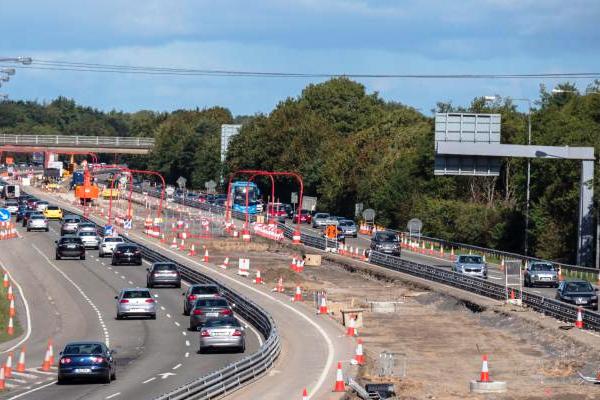 The seemingly relentless roadworks ongoing on the M7 will be finished by April.

So says Kildare County Council who have confirmed today that the project on the southern route to and from Dublin will be completed in the coming months.

Widening the existing M7 motorway – one of the country’s busiest roads – from two to three lanes for fourteen kilometres between Junction 9 Naas North and the M7/M9 interchange at Junction 11, began more than a year ago

A 60 KPH speed limit is in force along the site and has naturally and unfortunately for thousands of motorists, led to significance tailbacks, especially during rush-hour traffic.

“When it comes to planning of major public transport infrastructure projects, a common issue at the tender stage is a failure to identify all relevant costs and benefits.

“Specifically, public transport infrastructure projects should include a cost-benefit of incremental completion dates with a bias towards earlier completion of the project.

“However we live in an age when construction can be carried out 24 hours a day, seven days a week.

“The planning of public transport infrastructure must include a greater emphasis on the cost-benefit analysis of shorter construction timeframes.

While construction works take place on the M7 during weekdays, they are significantly reduced at weekends.

Senator Lawlor said if roadworks, and the associated effects of noise and traffic do not impact negatively on residential areas or the immediate environment, project managers must look at continuous construction on transport sites.

“While this may negatively impact on construction costs, the social, economic and environmental benefits are potentially huge.

“For example, the cost of congestion during construction of major road building projects should be considered and should influence the planning and tendering process. The annual cost of time lost on Irish roads due to congestion in 2012 was €358 million (Department of Transport). That annual cost will rise to €2.08 billion in 2033,” Senator Lawlor said.

“Safety and quality are of course paramount in public infrastructure but the delivery time for projects must inform all stages of the planning, tendering and project management process.  Increasing the productivity of construction sites with contract incentives are part of the solution to earlier completion of major projects,” Senator Lawlor concluded.

Government To Announce Timetable On Ending All Restrictions This Month