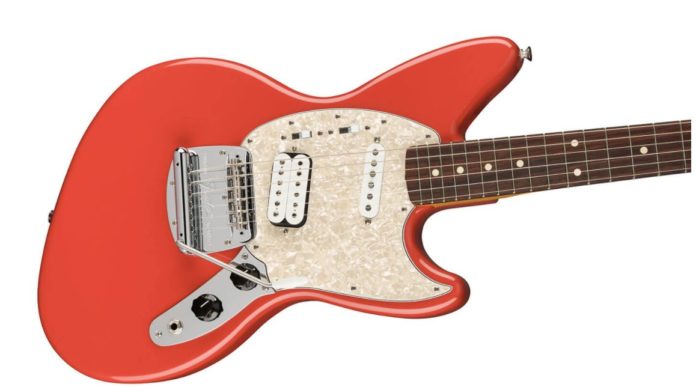 Fender have announced a new collection of guitars to celebrate artists like Kurt Cobain and Primal Scream’s “Screamadelica”.

This will be part of Fender’s new 2021 line up. Each guitar will reflect the musical heritage of the musician being honoured. This collection will also honour Dinosaur Jr’s J Mascis. These guitars are available from November 2021.

Kurt Cobain’s Fender Jag-Stang combines both his Mustang and Jaguar guitars to celebrate the 30th anniversary of Nirvana’s album “Nevermind”. It also includes the same features as Cobain’s original guitars.

These features include a 24-inch short scale length, an alder body, a vintage-style single-coil, humbucking pick ups along with a 7.25 inch radius rosewood fingerboard.

Speaking on the new collection, Fender’s Tammy Van Donk had this to say.

“As we begin the transition back to openings and look ahead to a music-filled fall and holiday season, we’re doing everything we can to provide dealers with products that will keep both new pandemic players and avid guitarists strumming throughout 2021 and beyond”.

He continued “Our dealers have gravitated to our immersive, online dealer experience in the past year”, he continued. “We’re proud to see how the platform has grown and connected the network. Supporting our dealers is our number one priority”.

“The needs of today’s creators and guitar players are continually evolving. Especially with the rise of home recordings and as new players boom from the pandemic”, Fender’s Justin Norvell also added.

“To meet this new demand, we’ve woven new specs and elements into these innovative instruments, introducing products that will ease the playing experience and inspire young, new players, but also professionals and fans of some of our most-esteemed Fender artists”.

In other news regarding Nirvana, their track “Smells Like Teen Spirit” which featured on that “Nevermind” album, recently surpassed one billion streams on Spotify. Check out that story here.

Courtney Love who was of course married to their late frontman Kurt Cobain recently released a cover of Britney Spears’ song “Lucky”. Love has always supported Britney Spears during her legal battle over her conservatorship.

The Beatles: Get Back Blu Ray & DVD Sales Have Been...