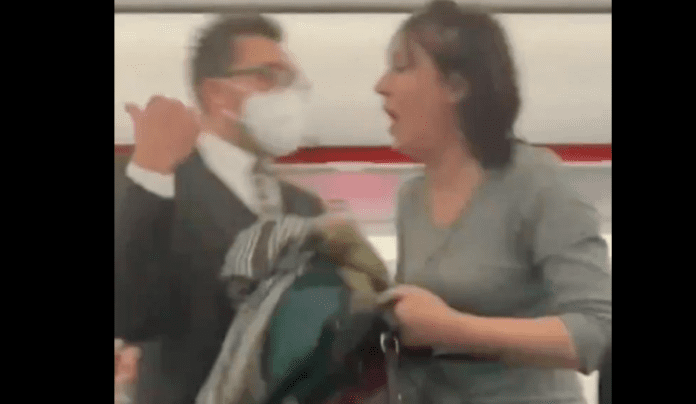 A woman, Sarah McGuire was warned she could be handed a prison sentence after she admitted an air rage incident over a face mask.

The 39 year old Derry woman was due to go on trial at Antrim Magistrates. Nine witnesses were due to give evidence, some via video-link.

However following a last minute discussion between defence and prosecution, she admitted to all but two of the charges.

McGuire’s defence counsel Sean Doherty confirmed his client would plead guilty to charges of common assault. She also entered a guilty plea to behaving in a threatning, abusive or insulting manner towards a member of aircraft crew.

Sarah McGuire also admitted to refusing to obey the lawful command of an aircraft commander.

The charges are understood to have arisen from an altercation on an EasyJet flight from Belfast to Edinburgh. The accused is seen on video being escorted off the plane by two staff members, not wearing a mask.

Sarah McGuire is heard coughing and shouting, “Everybody dies, you know that? If it’s from corona or not, everybody dies”.

Probation Report to be prepared on Sarah McGuire

Mr Doherty applied for sentencing to be adjourned while a probabtion report could be prepared. He added that her client’s offences were committed against a backdrop of “difficult and traumatic circumstances”.

The defence counsel said that these circumstances would be “fully outlined” in a probation report.

He added that his client was also charged previously for criminal damage and assaulting police. “She has been fully advised that, clearly, her liberty is very much in doubt”, he added.

“Left on the books”

After McGuire made her admissions, Deputy District Judge Ann Marshall was asked by prosecution to have charges of common assault and being drunk on a plane “left on the books”.

She also said that it maybe beneficial if the hours of footage taken of the incident on the plane from body worn camera footage, airport CCTV and social media footage were condensed down for whatever judge passes sentence.

The judge added that “edited highlights can give a fuller picture”.

She did warn McGuire that “going to custody is a very real possibility”.

Call For Extra Light To Be Added To The Five Lamps...

Teenager Released After Shooting In Coolock