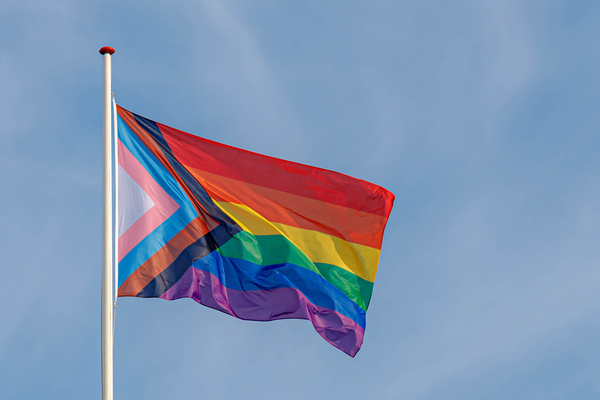 Following the re-hoisting by Waterford’s Mayor and activists, thugs cut down the pride flags again, from council buildings on the Mall. The latest incident occurred on Wednesday as posters advocated “Straight Pride” began to appear in the city. The image, which depicts a man and a woman, carries the caption: “It’s natural, it’s worked for thousands of years, and you can make babies”.

In the case of the first removal of flags, a man in his 40s had been arrested and charged with a count of criminal damage. The disgraced man is now due to appear before Waterford District Court on July 6th.

Following calls from Pride of the Déise and local radio stations, WLR FM and Beat 102-103, several establishments have begun hoisting the rainbow colours. University Hospital Waterford and City Hall will be the latest establishments to join in and raise a flag, with plans as early as this week. Equality minister O’Gorman, who said Irish people want to live in a “compassionate” country, is looking forward to raising the Pride flag.

“I’m delighted to be visiting Waterford, a city that for so long has shown such strong support for the LGBTI+ community”, declared O’Gorman. “Irish people want to live in a compassionate, progressive, and caring country, where everyone is valued and included. Pride of the Déise exemplify that, and I look forward to raising the Pride flag with them.”

The visit has been welcomed by the group, which had raised the rainbow flag alongside Mayor of Waterford Damien Geoghegan.

“We really welcome the minister’s support because it sends a clear message,” member, Debbie O’Rourke said. “It would be foolish to say that there’s no homophobia in Ireland, but it won’t be tolerated, and we are moving forward as a country and will see an end to homophobia and transphobia”.

Ms O’Rourke has called for a strong rebuke from community groups, as there is increasing concern for the incidents. “LGBT people exist. We’re not going back, we’re not going to be intimidated. We are concerned because it can get so unpredictable, and we would be concerned for people’s safety now. Community leaders across the board, from sports clubs to religious groups, should show their support and be public about it.”

An invitation from Waterford’s Green Party TD, Marc Ó Cathasaigh has been sent extended to Minister O’Gorman. The TD declared that the opponents of Pride demonstrations are “small and anonymous voices”, who do not represent Waterford.

“We have always been an open, inclusive and progressive city. The actions of a narrow-minded few only re-emphasise the importance of Pride. I admire and support the work of the Pride of the Déise festival, and I stand with them.”

Meanwhile, Dublin City Council and Dublin Pride have worked together to install a Pride rainbow walk in the capital. The colourful new crossing on Capel Street were imprinted last night, just outside local gay bar, Pantibar. Flags could already be seen across Dublin to show its support of Pride Month, with Dublin’s fire brigade wrapping one of its vehicles in rainbow colours.

Fears That DART Underground Could Be Shelved By Government