Home Sport Focus On V A R As Spain And Portugal Both Breath Sigh... 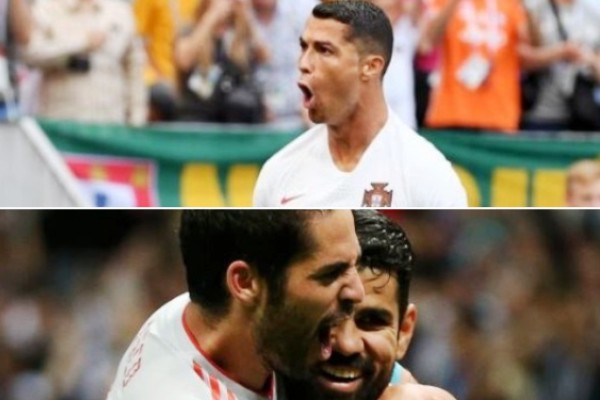 World cup day 12 ended in controversy with the naysayers against VAR gaining plenty of evidence to back up their claims that the video system does not work properly and is a huge time hold-up.

Events took an dramatic  turn in Group B, where the standings changed several times in the space of 90 minutes.

Cristiano Ronaldo even missed a penalty in the 53rd minute of Portugal’s drawn encounter with Iran in the 19th spot-kick of the tournament so far and a new World Cup record.

Ronaldo might have been level with Harry Kane had he not missed that penalty last night.

A 1-1 draw was ultimately enough for the European champions to secure second place after Ricardo Quaresma’s 45th-minute strike was cancelled out by a penalty from Karim Ansarifard.

While Spain had to work harder than expected against already-eliminated Morocco, their 2-2 draw was sufficient for them to top the group ahead of CR7 and his team-mates.

Khalid Boutaib and Youssef En Nesyri put the underdogs ahead twice in the 14th and 81st minutes, with goals from Isco (19’) and Iago Aspas (90’+1) ensuring that the points were shared.

The Africans and group rivals Iran must now head home. In the Round of 16, Uruguay will meet Portugal in Sochi on 30 June, with Spain set to play hosts Russia in Moscow a day later.

Spain despite being poor managed to top Group B and will face Russia in Moscow with captain Sergio Ramos admitting that there is much to be ironed out:

“We got through and won the group, that was the objective, but the game wasn’t good at all for us, it’s a night for everyone in the squad to take a look at themselves, we need to get ourselves into gear,” the Kop’s pariah said. “There’s no need to panic, but we do need to evaluate ourselves generally and individually, we can all contribute more and be more balanced defensively and solid so we can make the difference in attack.”

Scramblers Forcing Children Away From Football Training In Clondalkin

Rory McIlroy Determined To Bounce Back After Masters Disappointment