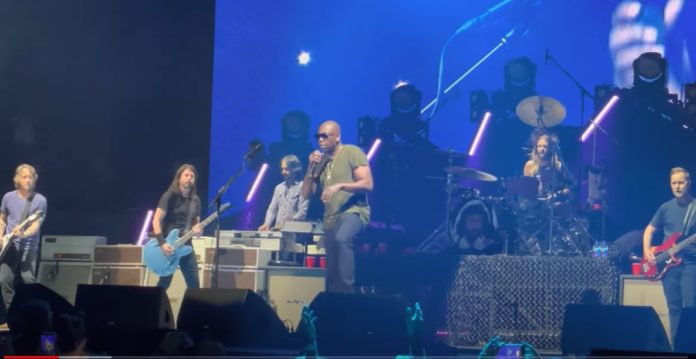 Over the weekend, Foo Fighters became the first band to perform live at Madison Square Garden since the pandemic began.

This was a concert that has attracted lots of heated debate and divided opinion, with some fans taking to social media to voice their discontent with the announcement that only people who have been vaccinated against the virus could attend the gig.

For the gig itself, Foo Fighters covered Radiohead’s single “Creep” with Dave Chappelle live at MSG.

Chappelle was supported by the entire band, with Grohl on guitar. It is also a cover that Chappelle has sang on numerous occasions.

Foo Fighters are no strangers to live covers. The band recently joined forces with AC/DC’s Brian Johnson to cover “Back In Black”.

This performance also took place in front of 27,000 non-socially distant attendees at the So-Fi Stadium, in aid of Global Citizen’s Vax Live Event.

The show was hosted by Selena Gomez and was set up by Global Citizen “to help end COVID-19 for all, end the hunger crisis, resume learning everywhere, protect the planet, and advance equity for all”.

You can check out that performance here.

A few days ago, Dave Grohl and co also confirmed the release of a new album under their alter-ego The Dee Gees.

The album is titled “Hail Satin” and will be also released to coincide with the second Record Store Day Drop on July 17.

The album was also recorded at the band’s “606 Studio” and will also include the late Andy Gibb’s cover of “Shadow Dancing” as well as covers of Bee Gees tracks and some for Foos recently released album “Medicine At Midnight”.