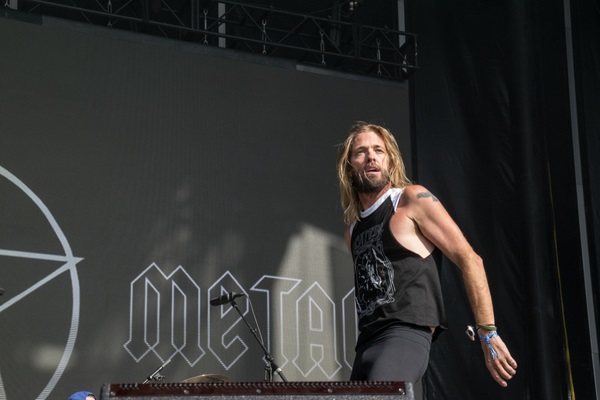 The world of rock music is in mourning after it was confirmed that Foo Fighters drummer Taylor Hawkins has died. He was 50 years old.

Having also made a name for himself playing drums for singer Alanis Morissette for her “Can’t Not” and “Jagged Like A Pill” tours, Hawkins also joined Dave Grohl at the Foo Fighters in 1997. He replaced their drummer William Goldsmith.

Speaking last year, Foos frontman Grohl also said that he was amazed that Hawkins took the decision to leave Alanis Morrisette and join his band. More on that here.

Sadly, the news of Hawkins’ death was also confirmed by the Foo Fighters who released this statement.

They said that they are “devastated by the tragic and untimely loss”.

“His musical spirit and infectious laughter will live on with all of us forever. Our hearts go out to his wife, children and family, and we ask that their privacy be treated with the utmost respect in this unimaginably difficult time”.

The Foo Fighters are currently touring South America, with their last show involving Hawkins taking place in Lollapalooza in Argentina on March 22.

Hawkins died before the band were due to perform at Festival Estero Picnic in Bogotá, Colombia on March 25. Lit candles were also placed by the stage in his honour.

“Our friend, our brother”

Following his death, several household names from the music world have paid tribute to Hawkins.

Expressing his devastation about the news, Queen’s Brian May also wrote, “No. It cannot be. Heartbroken. Taylor, you were family to us. Our friend, our brother, our beloved child. Bless you. We will miss you so bad”.

Rage Against The Machine’s Tom Morello also shared a photo of himself, Hawkins and Jane’s Addiction’s Perry Farrell adding that he “loved your spirit and your unstoppable rock power. Rest In Peace my friend”.

God bless you Taylor Hawkins. I loved your spirit and your unstoppable rock power. Rest In Peace my friend. pic.twitter.com/AkiRLF2L3e

. @TaylorHawkins was truly a great person and an amazing musician. My heart, my love and my condolences go out to his wife, his children, his family, his band and his fans. See you on the other side – Ozzy

You can also check them out below.

In utter disbelief at the news of Taylor Hawkins. Our deepest condolences to his family, his bandmates, his team, his friends and everyone that was ever touched by the music he created with @foofighters @Alanis and so many others. This is so incredibly sad. pic.twitter.com/2AUeqpaN94

Taylor Hawkins was a terrific drummer with a gorgeous disposition, seemed always to be having the time of his life. I didn't know him well but I know music is lessened by his passing, made duller and smaller. Requiescat.
🎈

Speechless and Gutted. Taylor was a great guy, a dad and a husband. My heart goes out to them, Dave and the band. What awful news. https://t.co/uQdl04etlp

Shocked and saddened to hear @taylorhawkins has passed away today.! 😞. Our prayers and condolences go out to the Hawkins family, ⁦@foofighters⁩ friends and fans. Sad. https://t.co/Mgu2K4SJyL

Meanwhile, Coldplay also dedicated a performance to Hawkins at a gig in Mexico. You can also check that out below.