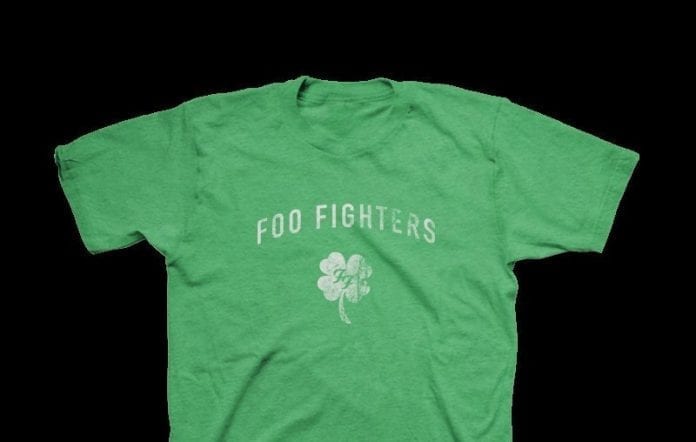 Top o’ the mornin’ to ya! from the American rockers Foo Fighters, the lads are getting prepared for Paddy’s Day next month by releasing a few special edition t-shirts.

Yes, next month it will be all leprechauns, lucky charms and a distinct lack of snakes and to celebrate the day Foo Fighters are releasing three new tees.

The third tee is also green, it has Foo Fighters written in black, a rocker looking leprechaun with KISS like makeup, giving the trademark ‘devil’s sign’ with his hands.

The t-shirts are selling for €18 and they’re available for pre-order now. Buy them here and they will ship the week of March 2nd.

‘Sonic Highways’ will be released on DVD and blu-ray on April 7th and will be available for pre-order from March 9th. It features extended interviews with Barack Obama, Dolly Parton, Chuck D, the Black Keys’ singer Dan Auerbach, Joan Jett, Fugazi and Joe Walsh.

U2 Invite Fan on Stage For Rare Rendition of ‘In God’s...