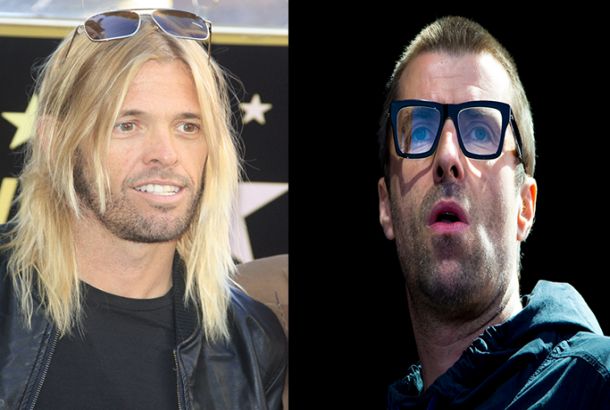 Taylor Hawkins, stickman with the Foo Fighters‘ has revealed that he would love to play the drums and write a song for Liam Gallagher at some point in the future.

Taylor has much love for Liam, he praised Gallagher as a ‘f**king good rock singer’ as well as claiming ‘wild’ nights together when the Foo’s played with Oasis, now the exceptional drummer has admitted that he’s open to a collaboration.

In an intereview with Matt Wilkinson on his Beats1 radio show, Hawkins was asked if he’d ever drum for Gallagher, ‘Absolutely. He hasn’t asked. He loves (Taylor’s track) ‘Range Rover Bitch’ – that’s so amazing! I’d like to write a song with him. If he likes ‘Range Rover Bitch’ man. I’ve already told him that, he knows. He’s such a character.’

Hawkins made the shrewd observation that Beady Eye only complicated matters for Gallagher and fans alike, ‘I think for him, having the new band Beady Eye was just confusing to people and now he can be Liam Gallagher which means he can play all the Oasis songs he wants and he can play his new album.’

Hawkins concluded that he’s delighted for the singer, citing his new solo work as his greatest output, ‘It’s really the best music he’s made since Oasis. I heard a few Beady Eye things and it was good but he knows he needs to write songs with other people. I’m stoked for him. And when he’s on man, he’s on! That’s what I love about him, he’s such a temperamental performer.’

Speaking to the NME, Hawkins can recall the Gallagher Bros getting agro on tour Stateside, ‘It was such a fun time, 1995-96, it was amazing. I remember their bus would pull up, outside of Ohio or New Jersey or something like that, and watching those two guys smacking each other, not even out of the bus. We’re going ‘ oh my god, there they are the real deal’. They look amazing and they’re beating the crap out of each other!’

‘Every time I see him I get a big hug. I love him. I think he’s one of the great frontmen over the last 20 years, no question. As far as a guy who can hold a microphone and sing, and really not do much of anything. He can move, one little sway, his hair’s always impeccable and he’s always got the best sweatshirt you’ve ever seen.’