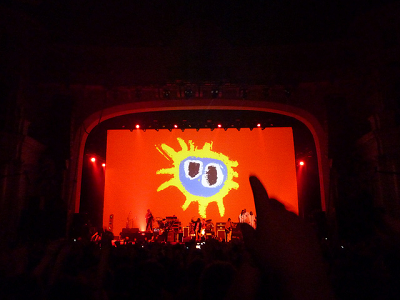 Former Primal Scream guitarist Robert “Throb” Young has died at the age of 49.

The news was confirmed by the band’s publicist that the musician has passed away, while a spokesperson for Sussex Police has also confirmed the death.

Young was an early member of Primal Scream, having met frontman Bobby Gillespie at secondary school in Glasgow in the Eighties. He was a pivotal member of the band and played on 1991’s Mercury prize winning Screamadelica. He left the band to go on sabbatical in 2006.

Primal Scream released a statement which reads: “We have lost our comrade and brother Robert Young. A beautiful and deeply soulful man. He was an irreplaceable talent, much admired amongst his peers, In the words of Johnny Marr ‘Throb with a gold top Les Paul -unbeatable'”

“He was a true rock and roller. He walked the walk. He had ‘Heart & Soul’ tattooed on his arm and i’m sure on his heart too. He once said to me “when we go onstage it’s a war between us and the audience” He never let go of that attitude. Our love and thoughts are with his sons Brandon and Miles and their mother Jane, his wife Rachel, and his immediate family.”

Rest In Peace Robert Young of @ScreamOfficial. That big power chord in Loaded is ringing out on the other side now

Beyond sadness today , RIP to the one and only Throb , over to the other side brother , we’ll love you forever . Melds n mani xx xx

Radiohead Returning To The Studio