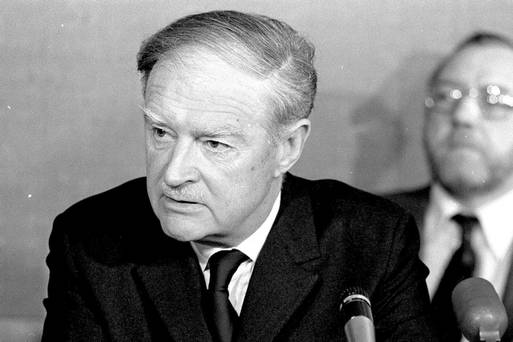 Former Taoiseach Liam Cosgrave has been remembered as a ”great statesman” and ”proud patriot” in the Dáil. Statements on his service to the state have been made in a special sitting of the Oireachtas.

The tricolour above Leinster House was moved to half staff as are all flags on government buildings and departments.

Cosgrave was an Irish statesman who served as Taoiseach in the 1970’s and played a key role in the Sunningdale agreement, which paved the way towards the peace process.

It was a rare occasion in the Dail chamber, when all 105 deputies took their seats in the packed benches.

The Taoiseach and Fine Gael leader Leo Varadkar lead the tributes to the former Taoiseach.

“His entire life was in the service of the State. He inspired so many with his quiet, showless determination, courage and fortitude”.

“Today a grateful country thanks and honours him for always putting our nation first.”

“Liam Cosgrave is perhaps best summed up by paraphrasing one of his most famous speeches: he was a man of integrity who, totally disregarding self-interest, always served the nation.”

The Fianna Fail benches were well stocked and leader Micheal Martin delivered a kind and non-partisan tribute to what he described as a statesman….

“There is no question that an absolute loyalty to his father’s ideals formed the core of Liam’s beliefs but he was also a major figure in his own right.”

The mood was sombre except for one moment when Richard Boyd Barrett of Liam Cosgrave’s Dun Laoghaire constituency revealed his own political melting pot and an aunt who had been a Cosgrave activist.

President Michael D Higgins says Liam Cosgrave served the people of Ireland with all his energy, intellect and passion.

Liam Cosgrave is entitled to a state funeral, though the family have yet to confirm arrangements.

Prince Andrew A “Person Of Interest” For US Prosecutors In Epstein...