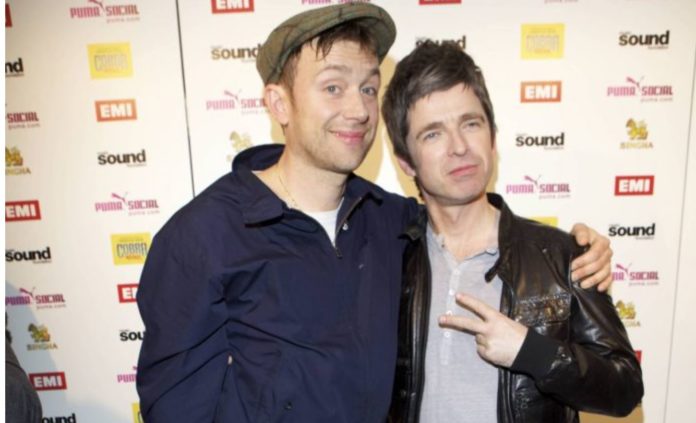 Noel Gallagher told Damon Albarn to “f**k off” after meeting him after the Champions League Final last month.

Noel Gallagher was not best pleased after his beloved Manchester City suffered a 1-0 defeat in the Champions League final to Chelsea.

After the match, Noel bumped into his former music rival and current collaborator.

“When the final whistle went, I f*****g took my pass off in disgust, fucking threw it on the stairs, walked out of the f*****g ground in disgust”, Gallagher told the Matt Morgan Podcast.

Noel Gallagher found out afterwards that his estranged brother Liam was also at the match in Portugal. He also accussed his younger brother of being a jinx.

“Mustn’t grumble”– Albarn on being a Chelsea fan

“There’s a lot of sport going on. Then again I mustn’t grumble, being a Chelsea fan!”, he said.

Back in the 1990s, Gallagher’s former band Oasis and Albarn’s Blur were locked in that famous Britpop battle.

Both bands released singles on the same day in August 1995 to determine who was boss. Blur’s “Country House” sold more copies with 274,000 to Oasis’ 216,000 for their track “Roll With It” in one of the best weeks for UK singles for decades. Although Oasis claimed that there were issues surrounding bar codes with their sales.

Albarn himself even compared Oasis to the “the bullies I had to put up with at school”.

Despite the success, Blur’s guitarist, Graham Coxon called it a “hollow, pointless victory” in 2009.

He also added, “Our record company threw a big champagne party at Soho House in London. I felt I was being forced into enjoying the moment and I just wanted to be alone really. I couldn’t handle being part of that crowd so I tried to jump out of a sixth-storey window. It was Damon who talked me out of it”.

However, following Oasis’ split in 2009 and the Gallagher brother being at loggerheads, Damon Albarn and Noel Gallagher have become friends.

Gallagher even joined Albarn and Coxon on stage for a show for the Teenage Cancer Trust in 2013.

“We don’t talk about our past, we talk about our present”, Albarn said in 2018. “I value my friendship with Noel because he is one of the only people who went through what I did in the Nineties”.

Albarn and Gallagher also collaborated on “We Got The Power” which also features on Gorillaz” “Humanz”.

“It was the ultimate self-congratulatory Britpop moment. It was the victory lap, these geezers singing about all the power they had”, Albarn said.

Back in March, Gorillaz celebrated 20 years since the release of their debut self-titled album.