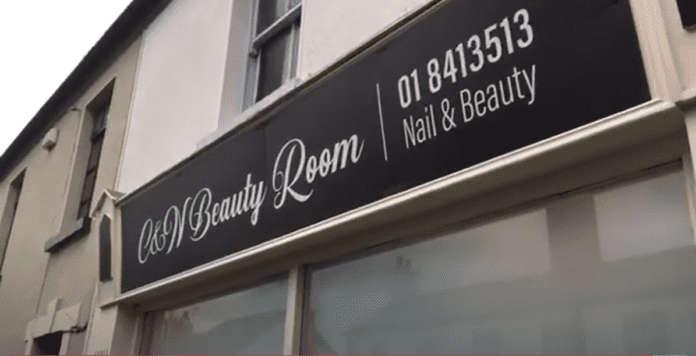 Gardaí are investigating after the C&N Beauty Room in Balbriggan opened to the public yesterday. The owner argued that she has a constitutional right to earn a living.

Christine McTiernan who owns the salon said she “took a stand” because she believes small businesses show be allowed to operate despite lockdown restrictions. Part of these restrictions requires all non-essential retail to stayed closed.

This comes after it was confirmed yesterday that Ireland’s lockdown will be extended until April 5.

The owner added that her salon was “booked up” within hours of re-opening, having been inundated with orders.

Ms McTiernan said, “I received calls from people in Galway, Wicklow and all over. The reaction has been phenomenal and the support has been great. People have been telling me ‘fair play’”.

Gardaí were called to the premises and requested that the salon to be close.

A Gardaí spokesperson said, “Gardaí attended a retail premises on Dublin Street in Balbriggan and are investigating alleged breaches of public-health regulations. A file will be submitted for the Director of Public Prosecution”.

They also added, “A number of fixed-payment notices will be issued, where appropriate, for breaches of travel restrictions for non-essential reasons”.

“Operating my restaurant on July 1”

This also comes after TV Chef Paul Treyvaud said his aunt-in-law passed away due to Covid-19, but he is still determined to open his restaurant in July, regardless of restrictions.

The businessman who runs his restaurant in Killarney said that Mr Treyvaud is “prepared to be arrested” by Gardaí.

Mr Treyvaud tweeted, “I have decided I am opening my restaurant July 1, no matter what. That gives them four months to sort out everything. I’ve done everything I’ve been told to do. 55k came in from the UK with the variant, now over 1500 from Brazil. The problem is no longer us. It’s an incompetent Gov”.

Mr Treyvaud also said this recently, “I’m not saying I’ll open now – it’s not safe. But I’m giving four months for the Government to get this (virus) under control.

“And if not, I will open up in July. My wife lost her aunt to Covid-19 last year and my wife got it too, so I know how bad this is. I fully understand and I commiserate with anyone who’s lost anyone to Covid-19. But we can’t just look at the Covid situation here, we must look at everything Covid has done, destroying livelihoods”.

Mr Treyvaud who was on Virgin Media One and hosts Treyvaud Travels on Amazon Prime, said that if trade in rural Ireland is unable to open in July and August “so many will close”.