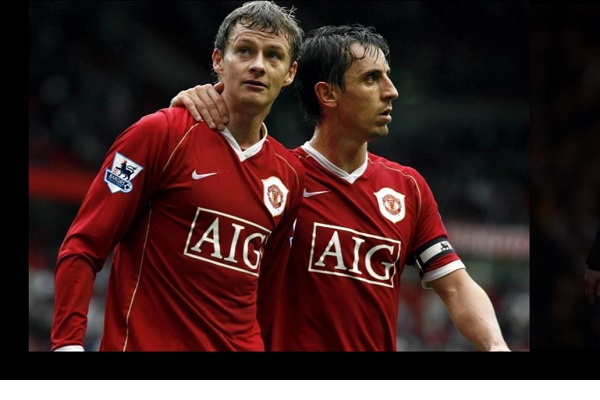 Sosjkaer’s sacking was confirmed following a series of poor results. The latest came on Saturday losing 4-1 to Watford. They have also lost 5-0 to Liverpool and 2-0 to Manchester City in the last month.

Taking to Twitter, Neville thanked Solsjkaer, saying that the Norwegian improved the club for the better in his tenure in the Old Trafford hot seat.

Thank you Ole. You did us proud . The last two months were tough but before that you restored some soul into the club. ❤️ pic.twitter.com/cseYVIFgqK

“Thank you Ole. You did us proud”, Neville wrote. “The last two months were tough but before that you restored some soul into the club”.

Neville himself has also been criticised for refusing to criticise his former team mate. Defeats to Liverpool and Man City are two of 7 losses that Man United suffered in their last 13 games.

Journalist and Arsenal fan Piers Morgan could not resist trolling Neville online. “You were 6th in the League when he joined, you’re 7th now… fyi”, he wrote.

Along with Neville, former Man United keeper Alex Stepney also paid tribute to Solskjaer with this statement via social media.

He wrote, “My very best wishes to Ole, when the noise dies down I hope he’ll still be loved by Utd fans, he deserves nothing less”.

Many United fans have also paid tribute to Solsjkaer, saying that despite the poor run of recent results, Ole still brought some good things to the United table.

“Time for a new chapter. Grateful for the memories under Ole and wish him the best”, @TheUnitedLink wrote.

@1ManUnitedNews also stated that Ole’s rebuilding of the United team should not be forgotten.

“Ole did a proper rebuilding. He did a better job than Moyes, LvG and Mourinho”, they said. “When success and trophies will be back to OT soon, do not forget that Ole played a big part in this”.

Other rival fans also took the opportunity to troll the departing Solskjaer, with Liverpool fan SamuelLFC sarcastically writing, “Thanks for the memories Ole, you’ll sorely be missed”.

Gardaí Issue Warning After Tractor Driver Caught Under the Influence of...