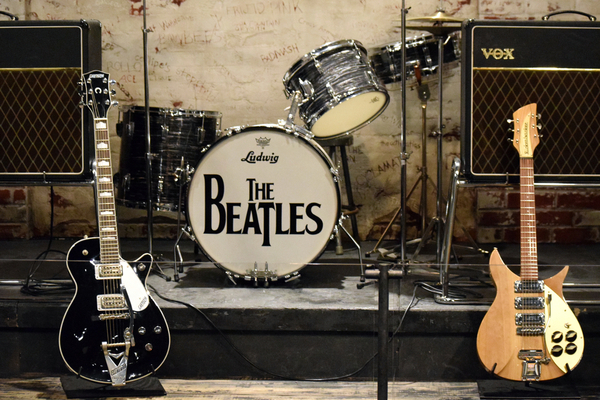 George Martin’s son has shared a new clip of his father reminiscing about The Beatles.

Giles Martin took to Twitter to share a clip of George telling his young granddaughter, who is Giles’ daughter, about the Fab Four.

“Well, that’s a silly name for a start,” George says, recalling The Beatles. “Who would ever want a group with the name Beatles?”

“I met them in London and when I listened…it was ok but it wasn’t brilliant,” he says of his first encounter with the legendary band. “But the magic bit came when I started to get to know them because they were terribly good people. They were funny, they were very clever…and they were the kind of people that you liked to be with. So I thought, ‘if I feel this way about them, other people will feel this way about them’. So therefore, they should be very popular.”

“I don’t normally share anything personal,” Giles captioned the clip, “but this [is] my Dad from a while back explaining to my daughter he signed The Beatles. Ordinary people do extraordinary things. Great decisions are made for the simplest reasons.”

George Martin passed away on March 8th, 2016, at the age of 90. A memorial service was later held on May 11th, with Paul McCartney delivering a eulogy for his former producer.

At time of writing the clip has racked up over three million views. You can watch it below…

I don’t normally share anything personal but this my dad from a while back explaining to my daughter he signed the Beatles. Ordinary people do extraordinary things. Great decisions are made for the simplest reasons. “I figured if I like them this much other people might too” ❤️ pic.twitter.com/j4bf96b4zS

The Beatles’ Help! has been adopted by the UK’s National Health Service for a campaign to raise mental health awareness.

John Lennon’s son Julian has given his approval to the NHS’s use of what he calls “one of the most honest songs Dad ever wrote with The Beatles.”

“By his own account in interviews over the years, he reflected that the lyrics were a cry for help at the time, as he occasionally suffered from depression,” Julian said of his father. “Using my Dad’s Help! lyrics in this way through the NHS will hopefully remind people that everyone is susceptible to mental health struggles and help alleviate the hesitation one may feel to seek assistance when needed.”

“In this day and age, when we are confronted with so much on a global scale, from the pandemic to the climate crisis — not to mention our own personal challenges in everyday life — it is very important for people to feel OK about asking for help with mental health,” he added. “I want to help normalise the practise of talking about mental health, in an effort to remove the social stigmas… If we all work together to raise awareness, perhaps someday the imaginary line that separates mental illness from physical illness will disappear…“