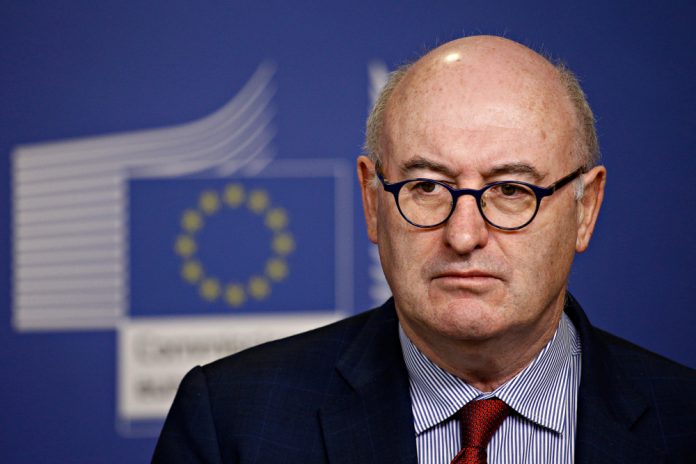 Phil Hogan will step down tonight, his spokesman’s confirmed.

It follows an investigation by Commission President Ursula von der Leyen into his involvement in the Oireachtas Golf Society Dinner — and his movements in Ireland in the preceding days.

The GolfGate row has already cost Fianna Fáil’s Dara Calleary his job as Agriculture Minister after just 35 days in the job.

A spokesman for @PhilHoganEU has confirmed Ireland's EU commissioner is resigning…

Mr Hogan had come under increasing pressure after he was asked to give an account of his movements while in Ireland by European Commission President Ursula von der Leyen.

His itinerary revealed he had not completed 14 days of self-isolation according to the rules for incoming travellers, and contradicted earlier statements from a spokeswoman for the Commission that claimed he had isolated for the full two weeks.

In an interview with RTÉ News yesterday Mr Hogan said that he broke no regulations while in Ireland and was no risk to anybody but made big mistakes and is very embarrassed.

He said that as he had tested negative for Covid-19 and it exempted him from the requirement to restrict movements for 14 days.

However the Department of Health issued a statement saying a person is required to restrict their movements for 14 days if they arrive into Ireland from a country not on the green list.

"Well, I don’t accept that. I did everything to ensure I was no risk to anybody"

Phil Hogan says he doesn’t accept the advice from the health service which states that even if you test negative, you must restrict your movements for 14 days | More: https://t.co/RE6IbDVbN0 pic.twitter.com/dw0oTSvy05