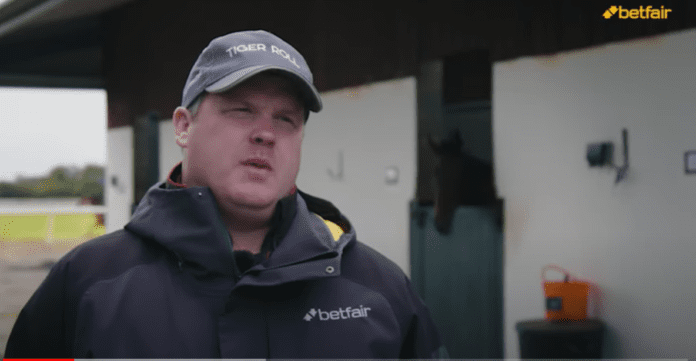 Gordon Elliott has “profoundly” apologised after a photograph of him sitting on top of a dead horse emerged online.

In the photo, Elliott can be seen sitting on top of the animal, whilst on his mobile phone. The Horse Racing trainer can also be seen displaying a peace sign with his left hand.

It had been orginally speculated that the photo was a fake or had been digitally manipulated.

However, last night Elliott confirmed that the photo was taken “some time ago”.

The photo is now under investigation by the Irish Horceracing Regulatory Board.

Gordon Elliott released a statement, “I apologise profoundly for any offence that this photo has caused“.

Elliott also insisted that “the welfare of each and every horse under my care is paramount and has been central to the success that we have enjoyed here at Cullentra”.

“The photo in question was taken some time ago. It occurred after a horse had died of an apparent heart attack on the gallops. I appreciate that an initial viewing of this photo suggests it is a callous and staged photo. But nothing could be further from the truth”.

“At what was a sad time, which it is when any horse under my care passes away, my initial reaction was to get the body removed from where it was positioned”.

“I was standing over the horse waiting to help with the removal of the body. In the course of which, to my memory I received a call and, without thinking, I sat down to take it. Hearing a shout from one of my team, I gestured to wait until I was finished”.

“Such background information may seem trivial at this time and will not allay the concerns of many people both within and outside the world of horse racing”.

“However, I feel it is important to provide people with some context surrounding this photo. To the racing community, to anyone who has worked with and loves horses and to anyone offended by this image I cannot apologise enough”.

“The care and attention to detail”

Elliott repeated that the welfare of every horse he works with is hugely important.

His statement continued, “Horse welfare and the care and attention to detail involved is absolutely at the core of everything we do here. Both myself and all of my team pride ourselves on those standards”.

“Again I apologise for any offence caused and ask people to consider this statement as opposed to the various falsehoods and misinformation being circulated on social media”.

“At this time I would like to stress that I continue to extend my full cooperation with the ongoing IHRB investigation”.

This also comes as Elliott is preparing for next month’s Cheltenham Festival. Tiger Roll is expected to run in the Cross Country Chase.

Elliott won back to back Grand Nationals with Tiger Roll in 2018 and 2019. He also became the youngest trainer to win the Grand National with Silver Birch in 2007.

Former jockey, Mick Fitzgerald had this to say. See here.