Home Music News McCartney Joins Grohl and The Foos To Perform ‘Get Back’ At Rock... 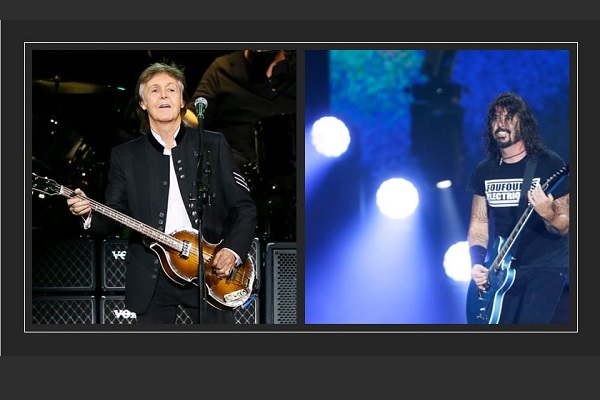 The newly inducted Foo Fighters injected a late-night jolt of adrenaline into the 2021 Rock & Roll Hall of Fame induction ceremony. Grohl and the band took to the stage for a brisk, no-frills three-song performance, before being joined by Beatles’ Paul McCartney, Rolling Stone reports.

The band kicked off their set with a particularly loose version of Best of You, as Dave Grohl screamed his throat raw. The enigmatic frontman was backed by Taylor Hawkins’ no-brakes drumming, and the kinetic guitar work of Chris Shiflett and Pat Smear.

Upon completion, the band dove straight into My Hero, joined by the backing vocals of the crowd for a sing-along. The Foos ended their own set with a rendition of signature track, Everlong, with keyboardist Rami Jaffee was noticeably swaying back and forth as the song simmered with nervous energy.

Following their Rock Hall speeches, the band returned to the stage to perform a show-closing cover of the Beatles’ Get Back with McCartney. Reverential toward the original, the rendition gave an extra bounce, as they rocked the stage with the Beatles legend. During the performance, Paul can be seen looking thrilled to be performing the 1969 classic, as he goofed around with Grohl and trading falsetto vocal lines.

Right off the back of their intimate warm-up show on Thursday night, the Foo Fighters were inducted into the Rock & Roll Hall of Fame. Just like Grohl’s other band, Nirvana did in 2014, the band gained induction in their first year of eligibility. For Nirvana’s induction, Grohl and bassist Krist Novoselic reunited to play together for the first time since 1994. The pair enlisted stars such as Lorde, St. Vincent, Joan Jett, and Kim Gordon to take lead vocals on classic Nirvana tracks.

Grohl compared the two experiences when speaking to Rolling Stone in May, as he admits, “Nirvana’s induction was obviously bittersweet. But we were honoured to be there, mostly to honour Kurt’s amazing music. This will be a different vibe, for sure.”