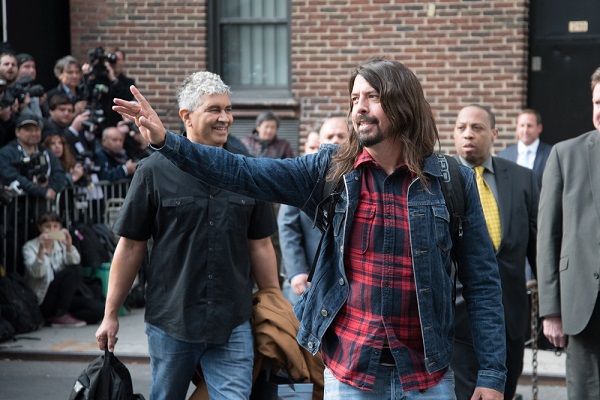 The “lifelong dream” of Foo Fighter frontman, Dave Grohl is to be a drummer for his daughter’s future band. The rocker has opened up on how his daughter provided backing vocals on the latest Foo Fighters record, as well as his high hopes for her future musical ambition.

Grohl’s daughter, Violet is already showing signs of following in her rocker-dad’s musical footsteps. The 14 year-old provided backing vocals for Foo Fighter’s song, Making A Fire on their new album Medicine At Midnight and Grohl is incredibly proud of Violet’s talent. The rocker told BBC that he has always harboured a dream of being a backing musician for Violet.

“Violet is an incredibly talented musician,” he smiled. “She can pick up an instrument and learn it within a week. She has perfect pitch and sings from her gut. And she’s well aware that she’s the best vocalist in the Grohl family.”

Grohl said to be Violet’s drummer “is one of my life dreams”. Dave also told how he did not realise just how professional Violet’s participation on the album was until he received a cheque.

“It seemed very natural (but) it didn’t seem official until my accountant called a few months ago and asked where she should deposit Violet’s cheque,” the rocker recalled.

“And I said, ‘What are you talking about?’ She said, ‘Well, she sang on the album so she has to be paid for playing on the record.’ And I said, ‘You can take that money and give it to me, and I’ll put it in an account for Violet that she can open when she’s 18 years old!’ Grohl quipped.

Grohl expressed his love for his other daughter, Harper, when he penned FF track, Waiting On A War. The rocker recently revealed that he wrote the song after his daughter asked him ‘Daddy, is there going to be a war?’ Click here to read all about his thoughts on the track for upcoming album, Medicine At Midnight, which releases on February 5th.