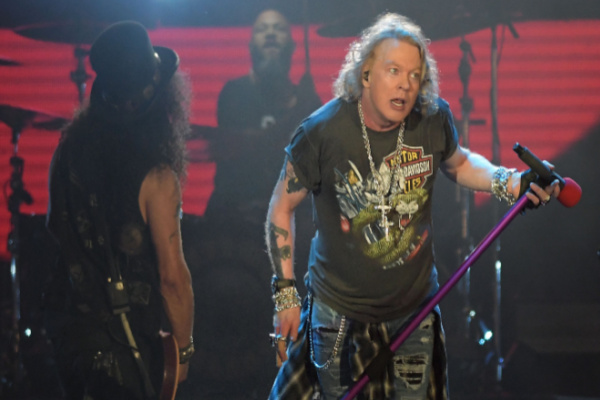 Guns N’Roses Axl Rose has released a statement regarding his ill health, which led to the band cancelling a recent gig at Glasgow.

Earlier this week, the band were forced to cancel their show at Scotland’s Glasgow Green, following “illness and medical advice”.

This cancellation was announced amid reports that Axl Rose had been problems with his vocals.

This led to the band playing shorter sets during their gigs as part of the UK/Ireland and European Tour last month.

During their recent shows at London, Guns N’Roses performed 22 shows on their first night in the capital. They played 19 on the second night. A normal set would see the band perform between 27 and 30 songs on stage.

“Due to illness and medical advice, Guns N’ Roses will not be able to perform in Glasgow tomorrow. Ticket buyers have been contacted by their point of purchase and we will be in touch about the rescheduled date”, Guns N’Roses said via a statement.

Yesterday, Axl Rose took to Twitter to offer fans an update on the situation. He revealed that the band are to return to the road, peforming in Munich as part of their tour tonight (July 8).

“We apologise for the inconvenience of postponing Glasgow”, Rose said. “I’ve been following doctor’s orders, getting rest with a vocal coach and sorting out sound issues. Seems good so far. Thanks again for everyone’s concern!”.

He added, “At the end of the day it’s about giving you the fans the best of ourselves and the best time we can give you and that’s all I, the band and crew are focused on. See you in Munich!”.