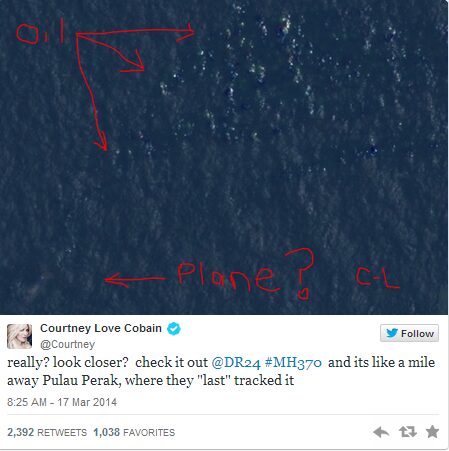 The ex partner of Kurt Cobain has added her two cents into the missing Malaysian airplane mystery which is going on for nearly two weeks now.
She took to her Facebook page to lay claim to the whereabouts of the missing airplane.
She posted a screen grab on her page to show what she believes to be an oil slick which could be where the Malaysia Airlines jet lies.

The Malaysian Airlines jet had 239 passengers and crew on board  when it disappeared on March the 8th. A massive search operation has been underway with 26 countries involved in the search, as of yet there is still no sign of the plane being found.

So who knows, her guess could be as good as any at this stage.

Huge Increase In Number of Incidents At Level Crossings This Year