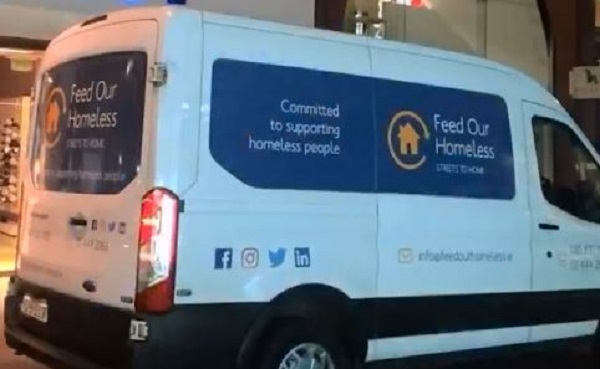 Three homeless charity volunteers had to leave a park fearing for their lives in the early hours of Friday morning.

That’s when a hooded figure wielding a knife started following the volunteers. The three people had been helping out with the Feed Our Homeless charity in Wolfe Tone Park.

According to reports, they came across the man, who was decked out completely in black, at roughly midnight on Friday. According to Dublin Live, volunteers were having a chat as they were attending to homeless people in the park.

Suddenly, the suspicious figure picked up a blade and started walking towards them. Terrified, the volunteers walked quickly to their van, got inside and locked the doors before calling the Guards.

The incident comes just a matter of days after a homeless man in his 50s was assaulted in Wolf Tone Park in a knife attack.

In a third separate attack on August 11th, another man was badly injured after an assault during which his mobile phone was stolen by two hoodlums in the same park.

Tony Walsh, the founder of Feed Our Homeless, told the media outlet he wants to raise awareness and highlight the fact that the park is very dangerous.

Tuesday night in Dublin City Centre and FOH emergency outreach team are currently stocking up the emergency vehicle with supplies. Our emergecy outreach team will be out on the streets tonight from 11pm till 2.00am. We will be engaging with rough sleepers in parks also along the canals and in hospitals around the city where some homeless people bed down for the night. Our team will be offering advice also support to anyone who may need it tonight while giving out hot drinks, sandwiches, also other essentials to help homeless people get through this horrible wet night around the city. FOH need your help tonight. If you see any homeless person in need of support out on the streets tonight please contact FOH emergency outreach team direct on 085-8109105 and a member of the team will attend your location as soon as possible. FOH would like to thank the you general public for your continued support. #FOH #Outreach #VoluntaryOrganisation #BeSomeonesVoice #Homelessness