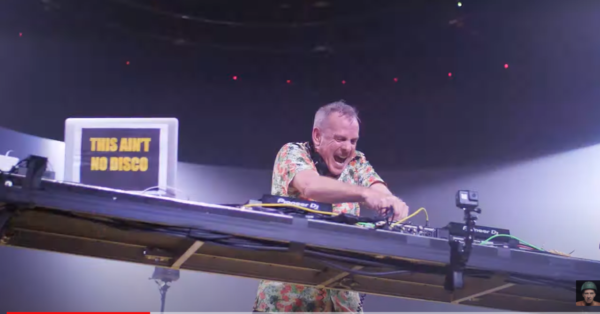 DJ Fatboy Slim has said that working in his family run café has helped his mental health.

The music star has owned the café in Hove for seven years. He has been working behind the counter, having not been able to DJ regularly due to the pandemic.

“It’s in Hove Lagoon which is literally the end of my road and it’s a family community cafe”.

He also added, “Both my kids have worked there over the years but then after 10 months of sitting around doing absolutely nothing because I can’t do my regular job, I got drafted in to help out because we lost two-thirds of our staff as they had to quarantine”.

“It’s a lovely little community. There is a lot of dog action, there’s a lot of kid action and it’s just a really friendly place to be rather than sitting around watching daytime TV”.

“It was built in 1910 so it’s very much an old school cafe. We do lots of veganism and organic produce, but we have basically a very traditional café and have lots of chips and burgers and coffees and ice cream”.

The star whose real name is Norman Cook also said that working in the café has helped his mental health.

Due to the pandemic, the only form of DJing that stars such as Fatboy Slim has been able to do has been via livestreaming. The star conceded that it is not quite the same as performing infront of a live audience.

Fatboy Slim said, “For most DJs our only avenue of expressing ourselves is to do live streams but for me the whole experience of DJing, the whole magic of it, is that communication with the crowd and the conversation you have”.

“It’s a two-way street and if you remove the crowd it’s just a bloke playing records on the table”.

He also added, “The streams that we have done, I’ve tried to put a little twist on it. The one I did with Idris (Elba) and we were Zooming into people’s lounges so we could see them on a big screen”.

“We could wave at them, send messages, dance with him and fist bump them through the screen which was quite a laugh”.

Lily Allen Hits Out At  Richard Ashcroft After He Says Musicians...