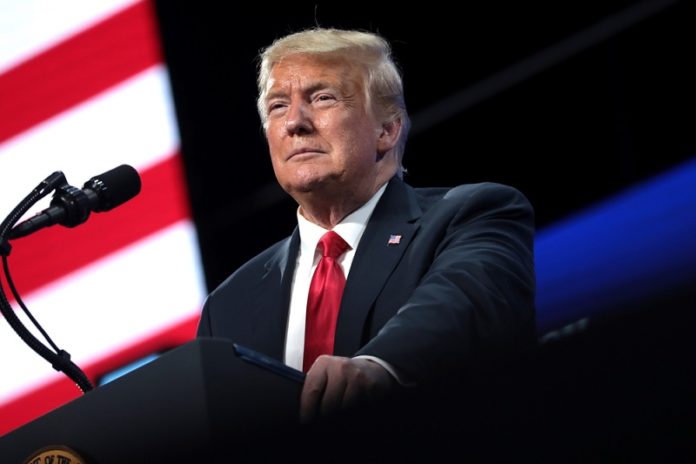 He may be banned from mainstream social media sites, but Donald Trump has now launched his own website. The website will be a platform for his supporters to stay in touch. It also showcases the former president’s time in office.

The website is called 45office.com. Its homepage displays a host of photos of Trump from his time in office. These include photos of the former president with his wife Melania, world leaders, along with members of the military.

Trump’s various social media accounts were suspended on January 6 following the attacks on the Capitol by violent extremists supporting him, following his loss to Joe Biden in the presidential election last year.

“Preserving the magnificent legacy of the Trump administration”

“The Office of Donald J. Trump is committed to preserving the magnificent legacy of the Trump Administration, while at the same time advancing the America First agenda”.

The site’s “About” section is a 850 word account of what Trump has cited as his achievements from his time as president. These include energy and boarder security, strengthening NATO and other international alliances. His response to the pandemic has also been cited as an achievement by Trump.

However, it fails to mention any of the scandals from his time in the White House. It fails to mention his two impeachments, corruption investigations or the attacks on democratic institutions that framed his presidency.

Trump still maintains huge influence over the Republican Party, despite his election loss to Joe Biden in 2020. He has also hinted at re-running for president again in 2024.

Despite his suspension from the likes of Facebook, Twitter and other social media outlets, a spokesperson for the former president, Jason Miller told Fox News earlier this month that Trump will launch his own social media platform in 2 to 3 months.

This comes as the CEO for YouTube Susan Wojcicki said that Donald Trump’s YouTube channel is to remain suspended until, “the risk of violence has decreased”. Check out more here.