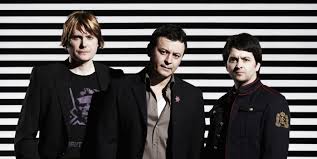 Indiependence has gone from strength to strength over the last number of years, since it began in 2006. Last year’s festival welcomed the likes of The Kooks, Editors, Bell X1, Ash and Walking On Cars to name a few (check it our below), and this year’s roster is just as impressive.

Tickets have been selling fast for what looks to be another 10,000 capacity sold out event at Deer Farm with headliners Tom Odell (Friday), The Coronas (Saturday) and Manic Street Preachers (Sunday) proving a massive hit with INDIE lovers.

Manic’s frontman, James Dean Bradfield spoke recently about the bands upcoming summer shows, “I don’t know if we’re going to road test new material, but we actually are really looking forward to playing live. It will be nice to feel like a band again.”

Some of the acts joining them for what promises to be a great weekend are Dublin singer songwriter, Craig Gallagher; Choice Music Prize nominated All Tvvins – who are also set to appear earlier in the summer at Sea Sessions in Donegal – indie rock band, Raglans and Lucan four piece The Riptide Movement.

The festival has also announced a new partnership with IMRO that will see the Irish Music Rights Organisation host the IMRO Big Top Stage at INDIE17.

“Indiependence’s reputation as one of Ireland’s leading music festivals continues to grow year on year, attracting music fans from throughout Ireland and beyond. We are delighted to be sponsoring the IMRO Big Top Stage this year which will showcase some of the finest new talent from Ireland and we look forward to welcoming an exciting line-up of musicians to Mitchelstown this coming August”, says Keith Johnson, Director of Marketing & Membership IMRO.

Early Bird Tickets for INDIE17 sold out within 24 hours and subsequent ticket tiers – which remained at 2016 prices – also sold out in record time. Tickets currently on sale are:

Tickets are available online at www.tickets.ie with a limited amount for sale at Mitchelstown Post Office.

Further line-up announcements will be coming soon, so check out www.indiependencefestival.com and www.facebook.com/INDIEPENDENCEFEST/ for updates and further information.