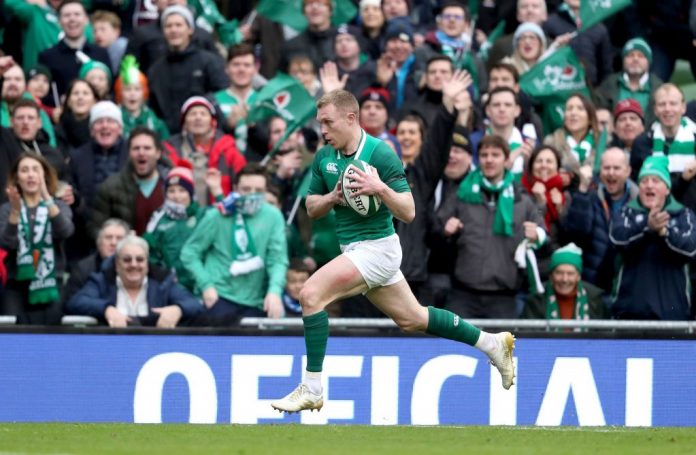 Ireland ran in eight tries this afternoon as they inflicted a painful defeat on the Azzurri in their first home game of this year’s Six Nations campaign. It finished 56- 19

The bonus point victory means Ireland’s hopes of winning the Grand Slam and claiming back the Championship title are very much alive.

The first try of the day came from number 13 Robbie Henshaw, two minutes later scrum half Conor Murray added one of his own. Both converted effortlessly from the boot of Johnny Sexton.

Bundee Aki crossed the line shortly after and with another conversion, the Irish led by 21-0 within the first half an hour, the majority of the action in the Italian half of the field.

The bonus point was secured five minutes before half time when Munster’s Keith Earls put his name on the scoreboard with a try of his own.

Italy were livelier at the start of the second 40 minutes but an interception from Robbie Henshaw deep in the Italian half resulted in his 2nd try of the afternoon and the team’s fifth.

The try was marred by an apparent shoulder injury picked up by Henshaw when he crossed over, he was carted away by medics and debutante and much talked about Jordan Larmour, came on to the field.

Captain Rory Best crossed the whitewash for the 6th try of the day after 53 minutes, this was then converted by Joey Carberry, just on the field and making his Six Nations debut.

Shortly afterwards however, Tomasso Allan got the Azzurri on the scoreboard when the Irish were caught napping in midfield.

The scoreboard now reading 42-7 with just over 20 minutes to go.

Jacob Stockdale kept the score sheet ticking over with another try, Italy responded with Gori crossing over.

Captain Rory Best was then replaced for the last few minutes by Sean Cronin, and Cian Healy on for Jack McGrath, a fast game taking its toll on many players at this point. Now 49-14.

Soon after those changes, Stockdale runs from one end to the other, adding another try for Ireland, his second of the afternoon. 70 minutes gone now!

This Jacob Stockdale lad is good, isn't he? #IREvITA

The Italians add another two tries but its too little too late!

Noel McNamara’s charges ran in 6 tries in a 38-34 bonus point victory over Italy.

Stoke Relegated After Ten Years In The Premier League