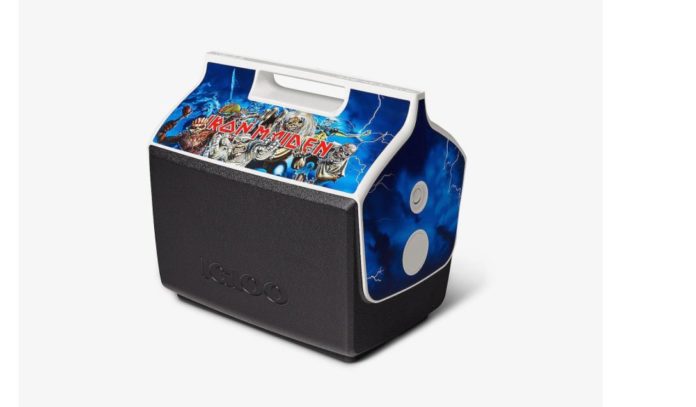 Great news for the Iron Maiden fan in your life! A cooler manufacturer that is based in Katy, Texas called Igloo have created an Iron Maiden cooler. Great way to keep your beer cooler!

This comes after it was announced back in May that the band had joined forces with BrewDog to release their own craft beer called Hellcat.

The beer has been described as a “citrus flavour with no less aggressive malty backbone”.

“We’re thrilled to partner with a world-renowned rock band like Iron Maiden. Iron Maiden, like BrewDog, have maintained their spirit of independence throughout their stellar career. Hellcat is a hop-forward lager with a golden hazy appearance and crisp finish, an epic beer worthy of this massive collaboration”, BrewDog’s CEO James Watt said in a statement.

Find out more on this, as well as what Iron Maiden’s Bruce Dickinson had to say about it here.

“Chill with the beast”

Since the, the cooler manufacturing firm Igloo have had this to say.

“Chill with the Beast!”, they said. “Appearing on every Iron Maiden album cover and at every live show, an army of Eddies — the heavy metal legends’ ever-evolving figurehead — takes center stage on this special-edition Iron Maiden Playmate Classic”.

This 14 quart cooler can also hold up to 28 cans of beer. The manufacturer have also promised that that the cooler benefits from an “original side push-button design for easy opening and secure closing”.

They also added that the “secure lid” will “help prevent spills”.

The cooler is available here.

Iron Maiden collaboration “Surreal in all the best ways”

“This collaboration has been surreal in all the best ways”, said Igloo’s Chief Marketing Officer, Brian Garofalow.

“By incorporating an army of instantly recognizable Eddies onto our Playmate Classic cooler, we’re able to provide Maiden fans a chance to chill with the Beast and own a unique piece of memorabilia”, he also added.

This “surreal” collaboration also follows in a long line of merchandise inspired by the band. They also joined forces with West Ham United Football Club to launch a new away shirt and training kit range.