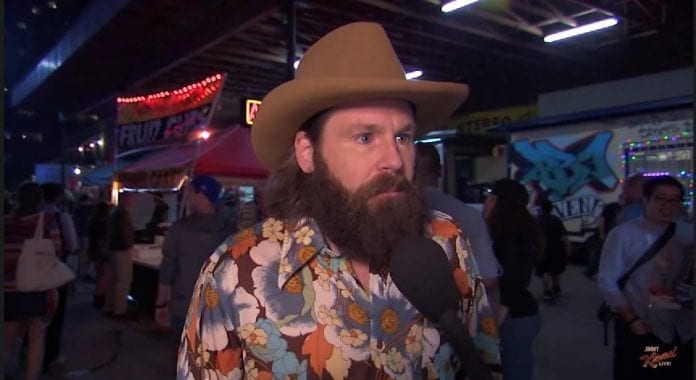 Jimmy Kimmel is back with another hilarious video showing fans lying about knowing the ‘hottest new bands’.

It was shot at this year’s South By Southwest event. SXSW is an annual music, film, and interactive conference and festival held in Austin, Texas.

One woman nodded vigorously when the band ‘Mary Kate And Nasty’ were mentioned. She described liking them because she likes female singers and she was even kind enough to label their music as punky-pop.

A man in a cowboy hat said he really enjoyed seeing ‘Eddie and The Man Purse’, another young man couldn’t remember his favourite ‘DJ Gluten’ song but he definitely knows and  likes ‘DJ Gluten’.

A young lady broke into hysterics when she recalled seeing the lead singer of ‘Vlad and The Putins’, come onto the stage on a horse, that’s something you’d never forget. The same girl claimed to not only know the french musician ‘DJ Fictional’, but she saw him perform live in his home country.

Moral of the story guys, if you don’t know the latest hipster band, it’s okay to say so, there’s over 3,000 bands playing at SXSW, we can’t know them all.