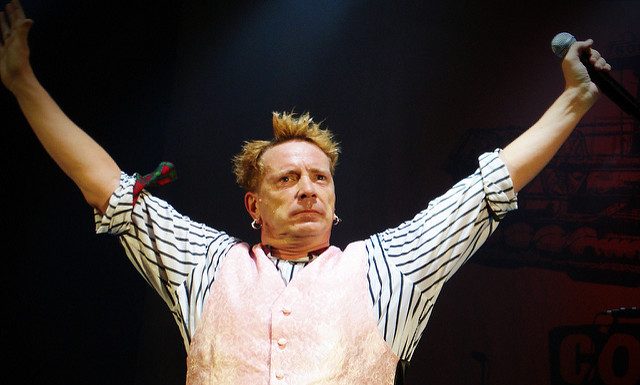 Johnny Lydon, or otherwise known as Johnny Rotten, has been hitting the media rounds of late and unsurprisingly is being controversial.

The Sex Pistols Frontman has been speaking about his admiration of none other than Donald Trump.

In an interview with NPR he described Trump as being like a cat amongst pigeons. Which we personally feel should be the title of his next album.
“I think he’s absolutely magnificent. He’s a total cat amongst the pigeons,” Lydon says of Trump. “It’s got everybody now involving themselves in a political way. And I’ve been struggling for years to get people to wake up and do that.”

This is a sentiment he carried over to his interview on GMTV with Piers Morgan and Susanna Reid where he spoke about how the left wing media were misinterpreting Trump.

“What I dislike is the left wing media in America are trying to smear the bloke as a racist and that’s completely not true”, he said. “There’s many, many problems with him as a human being but he’s not that, and there just might be a chance that something good’ll come out of that situation because he terrifies politicians and this is joy to behold to me”.

He also called Trump an a complicated person and even suggested that maybe he and Trump could be friends, although followed it up by saying it was because he felt that they would be able to have great arguments.

In an interview with Virgin Radio in an attempt to clarify his remarks he states that he believed that people are focusing on the wrong aspects of Trump.

“The attitudes that are being pulled on him are stupid and wrong. He’s got some serious money issues and business concerns that deeply fascinate all of us but to be smearing him as a racist, this isn’t right, there’s no evidence or proof to that and until there is, I’ll stand up and say that I think that’s wrong.”
Part of what is triggering his seeming sensitivity around being called a racist is his own experience with being labelled one.  In 2008, he was accused of a “racist attack” on Bloc Party’s Kele Okereke.

Lydon’s entourage and Okereke allegedly got into an altercation and  Okereke was allegedly told by the entourage and told “your problem is your black attitude” at a festival in Spain.

Lydon responded by saying that he felt “very sorry for a man who needs to lie about what was a perfect evening”, suggesting that Okereke had made the whole thing up because he was jealous that Lydon was talking to some Spanish bands.

What followed afterwards was multiple media outlets labelling him as a racists.

Lydon has spoken about the incident saying he found the treatment unfair. “In my past I’ve had that accusation thrown at me willy nilly and it’s a damn hard one to have to listen to and endure – make sure it’s right,”.

He also believes that it is a problem that is rampant in left wing politics.

“There’s a terrible attitude in left-wing politics – they just feel they have the pomposity and right to just throw these accusations out without any evidence – well don’t because my world requires facts.”

“For the next week and a half the rag-and-bone trade that we call the media is going to be calling me a racist, that’s the tomfoolery of it all. That’s going to be damn upsetting all over again to my grandkids, isn’t it?”