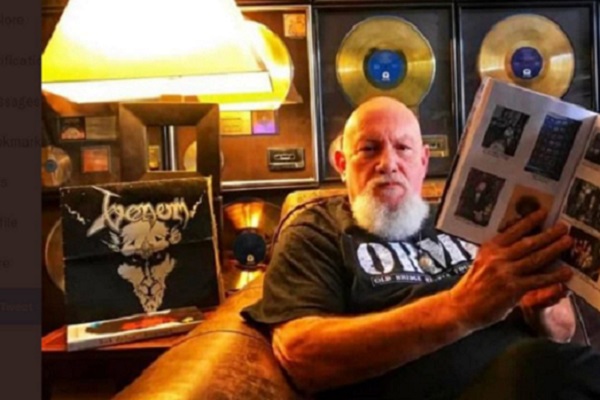 Jon Zazula who co founded Megaforce Records, a record label who propped the careers of acts like Metallica has died aged 69.

His death was confirmed via a Facebook statement from his daughter Rikki.

She stated that her father, “lived a life as fast, hard, heavy, powerful, and, impactful as the music he brought to the world”. She made mention of her late mother Marsha – who launched Megaforce alongside Zazula, and died of cancer last January – calling the couple “a powerhouse partnership in love, life, and business”.

“Together they believed in the unbelievable,” she added, asserting that the pair’s “passion, rebel perspective, and persistence built an empire from a box of vinyl in a flea market – into a multi platinum selling record label, management company, and publishing house”.

Zazula who was better known as “Johnny Z” began his career working in a record store in New Jersey with Marsha.

They were later inspired to found their own record label when they heard Metallica’s “No Life ‘Till Leather” demo. The pair officially launched Megaforce Records in 1982.

Metallica’s debut album “Kill ‘Em All” also put the label on the map.

Megaforce were hailed as one of the heavyweights of rock music. They also produced records such as Metallica’s “Ride The Lightening” from 1984. They also were involved with Anthrax’s record “Fistful Of Metal”.

Zazula stepped back from his role with the label in the 2010s. But he did release his memoir, Heavy Tales: The Metal, The Music, The Madness in 2019. Zazula also hosted the Cranium Radio show Jonny Z’s Defcon 4.

“He was a mentor, a manager”

Following his passing, Metallica took to their official Twitter account to pay tribute to their “mentor” Jon Zazula.

They tweeted, “Heavy music lost one of its great champions today when Jonny Z left this world far too soon. In 1982, when no one wanted to take a chance on four kids from California playing a crazy brand of metal, Jonny and Marsha did, and the rest, as they say, is history”.

“He was a mentor, a manager, a label head and a father figure to us all. Metallica would not be who we are or where we are today without Jon Zazula and his wife, Marsha. Our love and sympathy go out to Jonny’s children and his grandchildren, whom he cherished and brought to our shows from the time they were in diapers”.

Heavy music lost one of its great champions today when Jonny Z left this world far too soon. In 1982, when no one wanted to take a chance on four kids from California playing a crazy brand of metal, Jonny and Marsha did, and the rest, as they say, is history.

“The world of rock and metal would not be what it is today without Jon Zazula. Jon’s love of music and musicians was unwavering. A giant was lost today. Rest In Peace Jon”, they wrote.