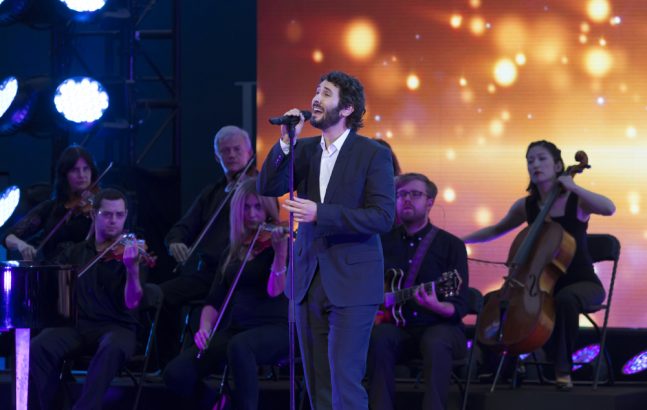 Multi-platinum award-winning singer, songwriter and global superstar Josh Groban announces his 2018 Arena tour will come to 3Arena Dublin on 16th December. Tickets cost €69.50 inclusive and go on sale at 9am this Friday available from Ticketmaster.

Speaking about his first stint of shows since his sold-out ‘Stages Tour’ in 2016, Groban said, ‘I can’t wait to get back on the road and play old and new songs for my fans,” Groban says. “It’s the thing I most look forward to. Creating a show each tour that gives everyone there, including me, an experience they want to hold onto.’

The LA native is the only artist who has had two albums appear on the Top 20 Best-Selling Albums list of the past decade, according to Billboard. He has appeared in the feature films Crazy, Stupid, Love, The Hollars, Coffee Town, and Muppets Most Wanted, as well as on NBC’s The Office, FX’s It’s Always Sunny in Philadelphia, and CBS’ The Crazy Ones.

Groban has released seven studio albums, his 2001 self-titled 5x-platinum debut, 2003’s 6x-platinum Closer, 2006’s double-platinum Awake, 2007’s 6x platinum Grammy-nominated Noel, 2010’s gold-certified Illuminations, and 2013’s gold-certified All That Echoes, which debuted at No. 1 on the Billboard Top 200 chart, giving Groban his first No. 1 debut and third chart-topper. In 2017, Groban concluded his Broadway run in Natasha, Pierre & The Great Comet of 1812, which Time Out New York called, ‘one of the best musicals of the decade’.

He also recently released his first book, Stage to Stage: My Journey to Broadway. which documented the past two years of his life on Broadway. Groban remains an active arts education philanthropist and advocate as a member of Americans for the Arts Artists Committee and Groban’s Find Your Light Foundation helps enrich the lives of young people through arts, education, and cultural awareness.

Currently, Groban is filming the new Netflix series, The Good Cop, starring opposite Tony Danza, and working on his eighth studio album due out later this year.

Vance Joy Adds Another 2018 Date To His Tour

UK Musicians Have United Together To Call For A Brexit Rethink