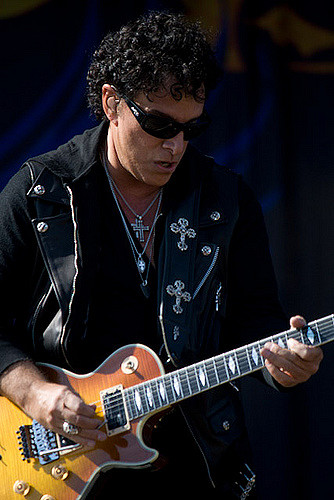 In a recent interview with Detroit Free Press,  the Journey guitarist responded to talks of the band reuniting with former frontman, Steve Perry by saying “You know, what people don’t understand is that we couldn’t even possibly be doing better right now, even if [Perry] was with us,”

Speculation has been rife in recent years that Perry would return to the band some day. Steve Perry was the band’s frontman for a lot of their best known songs including “Don’t Stop Believing”, “Any Way You Want It” and “Who’s Cryin’ Now”.

Perry, who is currently working on a solo album, fronted the band from 1977 to 1987 and 1995 to 1998. He made an appearance for a guest performance with EELS in 2014, after which, current frontman for the group, Pienda wrote a tweet saying that Perry should return to the band to reclaim “his righteous place.”

Chances of a follow up to the band’s last album, Eclipse, is uncertain. Talking about the 2007 album, Schon said “The coolest thing is that we didn’t have to talk about it or work at it to make it come together.”


Talking about the band’s original frontman, Journey keyboardist-guitarist Jonathan Cain said “We’ve got an open chair for him if he wants to sing a song, whatever he wants. We have said that all along. He chooses to remain aloof and that’s fine. Peace with him. We communicate on publishing, synchronization, licensing. It’s almost 30 years since Steve’s done a gig with us, so we’re not holding our breath.”

Manson Probed By LA County Sheriff’s Department For Allegations Between ’09...