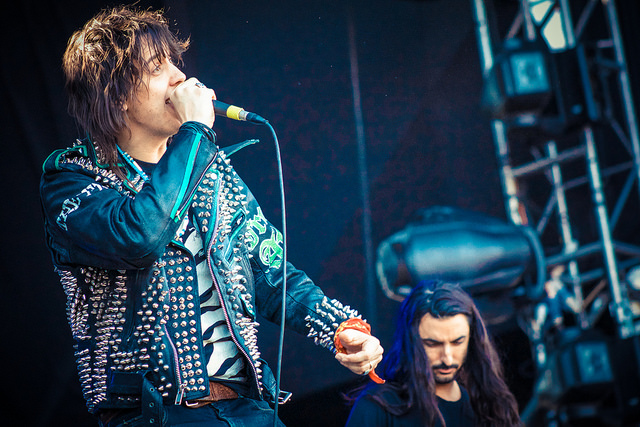 The Strokes’ frontman Julian Casablancas has been discussing his ambivalence for playing Strokes songs and his problems with alcohol.

Speaking to Rolling Stone, the singer explained he doesn’t “feel anything from” performing classic tracks from Is This It like ‘Last Nite’ or ‘The Modern Age’.

He also talks about his serious issues with drink, stating that in the mornings he was downing vodka before getting out of bed.

Casablancas said, “A little while ago, I saw someone perform a cover of some Top 40 song in an empty bar, like he probably just learned it two days ago. He was probably enjoying playing that more than I enjoy playing ‘Last Nite’. I just smiled about it.”

Discussing his battle with alchoholism, Julian said, “I was probably charming 10 percent of the time, when I had a perfect buzz.
You think, ‘I’m brave and I’m crazy and I can drink.’ But it’s really like, ‘I can’t socially talk to people without having a stupid fake confidence that’s obnoxious.’ You think it’s like truth serum, but it’s more like asshole serum.”

“I was hungover for, like, five years. Like, literally four years after I stopped drinking, I still didn’t feel 100 percent. I still had that feeling of being a little hungover, and you just don’t want to go downstairs to the deli, and you just want to stay inside. I felt kind of really roughed up by it.”

The singer recently released his second solo album Tyranny with his band The Voidz. The new record sounds like heavy, gritty and punk, with some Strokes-inspired guitar work. Casablancas describes Tyranny as a “protest record.”

The album, which is the follow-up to 2009′s Phrazes For The Young, is Casablancas’ first with his new backing band The Voidz. Watch their first video ‘Where No Eagles Fly’ here.