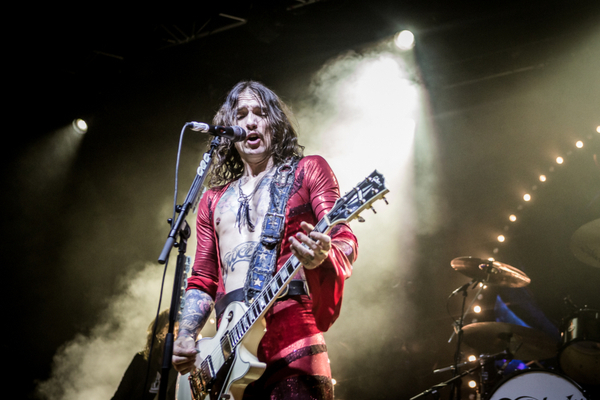 Jon Bon Jovi has received strong criticism over his vocals, following last month’s US Tour with his band Bon Jovi. One reviewer even called the singer’s performance “shockingly poor”.

Representatives for the band have yet to comment on the matter.

Bon Jovi May Need “some kind of therapy” Says Hawkins

During a recent episode from his YouTube series Justin Hawkins Rides again, the Darkness frontman had his say on the recent flack Bon Jovi received over his recent singing performances.

Expressing sympathy for the rocker, Hawkins felt that Bon Jovi’s vocals sounded “tired”, rather than having a vocal problem.

“It sounds like he needs some kind of [vocal] therapy”, Hawkins said.

“It doesn’t sound like it’s a polyp or some sort of lump on his vocal cords, because that would be more unpredictable — he would be hitting the notes, and then it would squeak off and it would do something unexpected”.

He added, “But that’s not what’s happening here. This sounds like he’s super-tired”.

Justin Hawkins subsequently claimed that Bon Jovi has been unable to find the “muscle memory” in his voice.

“It sounds like something he’s gonna need some therapy with — actually talk to somebody and try and coax the performances back out”, Hawkins explained.

“It doesn’t sound to me like there’s damage in there. I’m not a doctor, but I’ve experienced voice problems before. And to hold a note with it being off key suggests some pitching issues that might be to do with hearing as well”.

“It’s not fun to watch this, and it isn’t fun to regard one of the greats… He’s a great singer — he always has been — but this sounds like something is eating away at him from the inside”.

“I feel like the people around him need to tell him to stop”.

Back in February, Bon Jovi had announced that they would hold auditions for bands interested in supporting them on this tour. More on this here.