The vicious killer Graham Dwyer has taken a case against the Irish State to the European Court of Justice (ECJ). Dwyer (48), a former architect was given a life sentence in 2015 for the murder of Elaine O’Hara, a 36-year-old childcare assistant who lived in Stepaside, Dublin.

The murder on or around the 22nd August 2012 horrified Ireland. Dwyer, it seems, thought he had committed the perfect murder. Evidence produced in court proved that Dwyer, at the time a husband and father, had been having a longstanding abusive sexual relationship with Elaine O’Hara.

Video and written evidence showed that Dwyer indulged rape and sexual abuse fantasies with Elaine O’Hara and a number of other women. He enjoyed stabbing women for sexual kicks. Dwyer thought that he had covered his tracks. One year after the disappearance of Elaine O’Hara no one was seraching for the young woman who had a long history of mental health issues. Her car had been found in a car park near the coast.

A chance sighting, by some fishermen, of something in the water in the Varty reservoir led an off-duty Garda to discover a bag with several items connected to Elaine O’Hara and some mobile phones. 3 days after the suspicious discovery, Elaine O’Hara’s remains were found by a dog walker many kilometres away in the woods near Kilakee in the Dublin mountains. The remains were so badly decomposed and destroyed by animals that no cause of death could be readily established. It was the mobile phones found in the watery rucksack that were to prove key to the investigation.

Through painstaking work carried out by Garda experts, the messages on those mobile phones led to Graham Dwyer’s downfall. Plans to satisfy Dwyer’s overwhelming desire to rape and kill were revealed by the messages. He demanded that Elaine O’Hara either help him to kill another woman – Dwyer had targeted a female estate agent at one point – or offer herself up as his victim. Graham Dwyer was convicted of murder and sentenced to life in prison. The dangerous killer immediately srated an appeal. He has now edged closer to a success in that appeal.

A case has been referred to the ECJ. It is expected that the ECJ will rule that the Irish state does not have the right to retain citizens’ mobile phone data. Two recent cases referred to the European Court ruled against states holding such info. The European Court has asked the Irish Supreme Court whether it wants to continue with the case at all, in light of its recent rulings. Basically, telling the Irish state that they’re going to lose at the ECJ.

The rulings stated that general keeping of mobile phone data is not compatble with European law ecept in very specific circumstances. One legal official here said, “It seems the European Court of Justice has decided that retention of data must only take place in very considered circumstances and only where there is a level of proof already”.

At an online conference, the official continued, “To put it in crude terms, it reminds me of the Movie Minority Report where you need an element of clairvoyance in advance to know that a crime will be committed in the future to apply for retention of data on today’s date”.

Basically, the ECJ is likely to tell the Irish state what it told the Belgian and UK authorities: unless you already know that a crime will be committed, you can’t keep mobile phone data.

The balancing act between citizens’ rights to data protection and the ability of police forces everywhere to solve crimes, is a difficult one. The sick killer of Elaine O’Hara may not have been convicted had the mobile phone records not been retained by the state. Dwyer, seen on camera stabbing and wounding Elaine O’Hara, could have walked free to perhaps, indulge his fantasies again.

The Irish Supreme Court has told the ECJ that it does wish to continue with its case. Heraings are expected to begin in January. The Gardaí, Irish courts and the family and friends of Elaine O’Hara await the decision with concern. 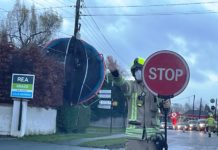 Four Kids Get ‘Poo Thrown At Them’ Before Attack On Boy...