Home Music News Going To The Killers In The 3Arena? Here’s A Taste Of What... 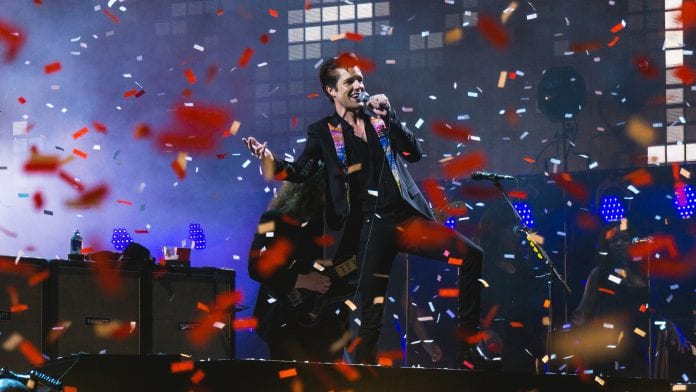 The Killers are set to visit us in the 3Arena, Dublin on the 16th of November as part of their ‘Wonderful Wonderful’ tour. The first night of the tour kicked off in Birmingham’s Genting Arena last night.

Fans weren’t disappointed with the show, with Brandon Flowers leading the band straight into the breakout single from the ‘Wonderful Wonderful’ album, ‘The Man’. They then went straight back to their beginnings with a massive rendition of ‘Somebody Told Me’. This version of the monster hit gave the band a chance to use and show fans their new production set-up for the first time.

This new staging allowed drummer Ronnie Vannucci Jr to play his kit on a raised platform at the back of the stage, while a rusty water tower decorated the main part of the stage, bringing a piece of Vegas to Birmingham.

The first live performances of ‘Wonderful Wonderful’ went down well with the crowd, along with other new tracks ‘Rut’, ‘Some Kind Of Love’, before playing the classic ‘Believe Me Natalie’. The first time the band have played it since 2009.