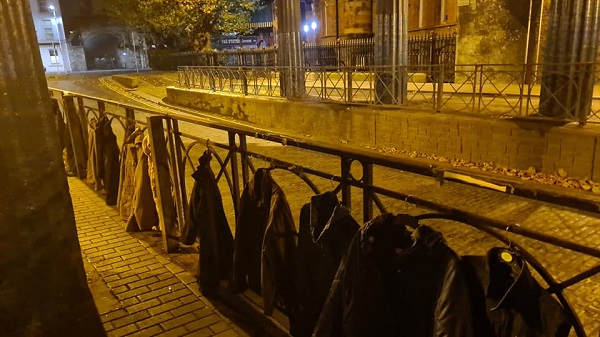 Dublin is hitting sub-zero temperatures over the next few days and thoughts turn to the homeless population.

Last night, volunteers from local organisation, Warm For Winter got together to deliver a very thoughtful gesture. They hung 31 coats and hats for the homeless under Connolly Bridge, with a note attached.

“If you need one, please take one. If you want to help, please hang one up.”

In the space of a week, Dublin saw at least three homeless people lose their lives. The death toll in Ireland is now over fifty for this year.

A homeless mother of four was found dead in her tent in Clondalkin. The body of a man in his forties was found near the IFSC. In the last few days, the body of another man was found at a premises on North Frederick Street.

Warm For Winter posted on their social media page to share their initiative and encourage others to help the homeless. A spokesperson wrote that they placed out coats because the weather is “due to get rough over the weekend“. Their post refers to the current restrictions which state that clothing aisles in supermarkets are non-essential.

“Clothes may not be essential for the big boys in the Dáil but for the people on the street, there’s nothing more essential.”

The group had some trouble last year

“I have to say I was pretty angry that the jackets where taken down under ‘health and safety’ issue when the country is crying for the health and safety of our nation’s homeless,” Fryers said. “#Warmforwinter was never contacted from Dublin City Council in relation to the jackets and we still don’t know what charity DCC claim they have given the jackets to.”

With the weather due to be wet and windy, the group are leaving coats under Connolly Bridge but will return to Ha’penny bridge on dryer occasions.

In recent news, a couple have been scamming homeless people by paying them for their PPS numbers in order to prepare false identity documents. Read more here.

International Hitman Flown In From Estonia For Hutch-Kinahan Feud