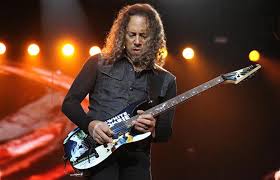 The set took place during Kirk’s own horror-themed festival, Fear FestEvil, at the Regency Ballroom in San Francisco, California, an event that also featured gruesome exhibitions and horror screenings amongst all the music mayhem.

Hammett teamed up with his former band to perform “Piranha” and a cover of Blue Oyster Cult’s “Godzilla” During their set at The Regency Ballroom; the guitarist was a member of Exodus before joining Metallica in 1983.

You can see the performance of Kirk with Exodus here

Bob Dylan ‘Blowin In The Wind’ Recording To Sell At Christie’s...