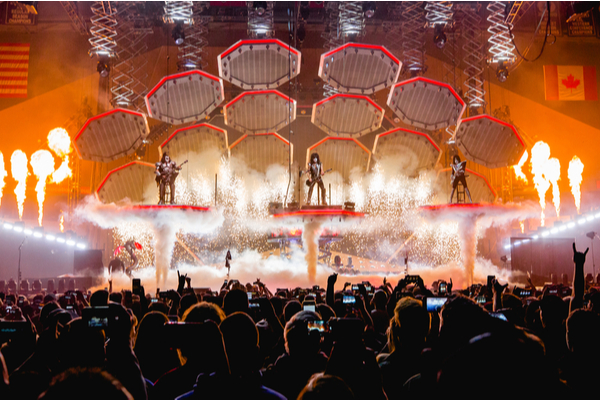 KISS frontman, Paul Stanley has reiterated his belief that the legendary rock band could carry on without any original members. The band launched their second “farewell tour” more than two years ago, dubbed: “End Of The Road Tour”, scheduled to finish in 2022.

Guitarist, Tommy Thayer and drummer, Eric Singer join founding members Stanley and Gene Simmons in the band’s current lineup. The pair replaced original members, Ace Frehley and Peter Criss and show might show a glimpse of what Stanley suggests. Appearing on Germany’s Radio Bob!, Stanley was quizzed on if he thought a KISS 2.0 version could continue touring and recording, once he and Simmons officially retire.

“I think that recasting KISS or KISS 2.0 is not what we have ever talked about. Can KISS continue and can it evolve without us in it? Well, yeah, because it’s already 50 percent there. In other words, there was a time where people said, ‘Well, it can only be the original four.’ [And then] it was, ‘Well, it can only be the original three.’ Well, things move on and circumstances change.

“Could I see KISS evolving with different personnel? Yeah,” he reiterated. “As big a fan as I am of what I do — and I think I’m damn good — there’s other people around who could pick up the torch and bring something to the philosophy and to the live show and to the music. It would be KISS. It wouldn’t be KISS 2.0. If it were to happen, yeah, it would be really just a continuation of the philosophy that we’ve always had, and that’s that KISS is bigger than any member.”

In 2005, KISS manager, Doc McGhee first mentioned that the group had “been toying with the idea of recruiting an entire band to don the band’s famous makeup.” McGhee said: “KISS is more like Doritos or Pepsi, as far as a brand name is concerned. They’re more characters than the individual person. I think [new members] have a legitimate chance to carry the franchise.”

McGhee is not wrong in fairness, as the band have launched an unthinkable amount of merchandise, including their latest KISS Cold Gin. In recent times, Stanley, himself has spoken of what way he would go about recruiting someone to replace him in KISS.

“Honestly, I think all the KISS tribute bands are great, but none of them have a good ‘Paul.’ So I’d like to see somebody who incorporates what I’ve done with a lot of the things that inspired me. And it’s not a matter of a puppet being me; it’s somebody who comes in and contributes and adds something new to it while still following the template that’s been set.”

In 2016, Ace Frehley admitted that the thought of KISS continuing without its original members was “the most ridiculous statement I’ve ever heard [Stanley and Simmons] make”. He added: “I think the only reason they make those statements at this juncture is to try to validate the fact that they have two other guys in the band that aren’t the original members. So, they’re trying to rationalize to the fans, ‘Well, you know, we replaced Peter and we replaced Ace, and eventually we’re gonna replace ourselves.

“That’s like Mick Jagger saying, ‘Yeah, after me and Keith [Richards, THE ROLLINGS STONES guitarist] die, THE STONES will continue on with two other guys.’ I mean, it’s a joke.”