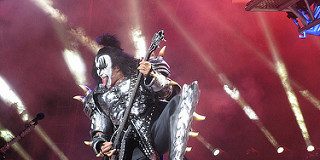 Kiss took to the stage sans makeup, in the U.S over the weekend to help raise money on behalf of Oregon’s military veterans.

The band’s onstage personas, The Starchild and The Demon took a back seat to help raise more than $1.2 million at a gala fundraising event for a military museum named after guitarist Tommy Thayers father.

Thayer’s father is 94-year-old retired Brigadier General James B. Thayer. He is a decorated hero who served in World War II.

Delighted with the success of the event, Kiss co-founder Paul Stanley, took to social media the day after the show to congratulate his bandmate for all his hard work on behalf of Oregon’s military veterans. ‘Go Tommy’ he wrote.

The band don’t often play without their signature makeup; speaking with Forbes, Thayer explained their involvement:

“Obviously, this is important to me on a personal level because my father is involved but it is important, too, for people to remember and commemorate the amazing people and their stories of heroism. The things they did for our country are inspirational and help us understand where we came from, what helped make us, as a country.” He went on to say, “The band as it is today, all of us are very close and very supportive of each other’s charitable and philanthropic efforts, and especially this one. We have supported the military and the veterans throughout our tours in various ways.”

KISS have a busy year ahead of them. They are set to appear as Kings of Mardi Gras at Endymion this weekend. Paul Stanley told Billboard, “We were actually kings of Endymion in 1979 in New Orleans but there was a police strike so we couldn’t participate. Then we have a tour of Europe coming up.”

When asked what tours like are for Kiss these days, Stanley replied “Every time we hit the road now it’s a victory lap, we’re celebrating what we’ve done and it’s a joyous night with people who either have been there since the beginning or people who may have joined yesterday.”

A New Song Has Leaked From Smashing Pumpkins