Home News Korea Is One! 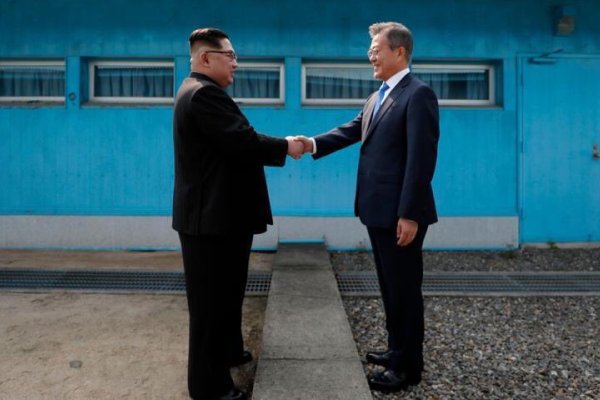 The leaders of North and South Korea have agreed to work towards the ‘complete denuclearisation’ of the Korean peninsula.

It’s a seminal day as the Korean War will be formally declared over after 65 years, according to both the North and South.

Both leaders planted a symbolic tree after what are being described as “sincere and candid” talks at an historic summit. It’s the first time it’s happened since the Korean war six decades ago.

At a historic summit between leaders Kim Jong-Un and Moon Jae-in, the neighbouring countries agreed they would work towards peace on the peninsula with a formal end to the conflict set to be announced later this year.

The pair agreed to bring the two countries together and establish a “peace zone” on the contested border.

At their first summit in more than a decade, the two sides announced they would seek an agreement to establish “permanent” and “solid” peace on the peninsula.

“The two leaders declare before our people of 80 million and the entire world there will be no more war on the Korean peninsula and a new age of peace has begun,” the official declaration said.

The statement included promises to pursue military arms reduction, cease “hostile acts,” turn their fortified border into a “peace zone,” and seek multilateral talks with other countries, such as the United States.

The U.S. President says historic talks between North and South Korea show good things are happening – but he also placed doubt on how long the positivity will last.

The two sides have agreed to work together to get rid of nuclear weapons in the region. But Donald Trump wrote on Twitter, “only time will tell.”