Home News Leo Says Boris Reopening The Lot Is Too Risky But Warns Against... 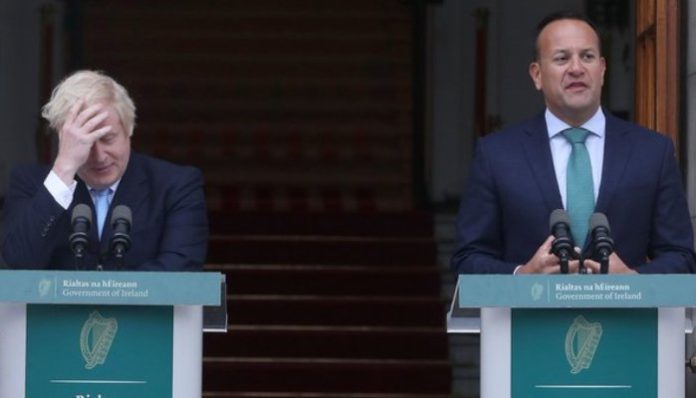 Boris Johnson‘s re-opening plan has been described as “too risky” by Tánaiste Leo Varadkar who has said people here though shouldn’t get into a “spiral of fear” when it comes to the spread of the Delta variant.

He said an increase in the number of cases predicted by NPHET isn’t as serious as it would have been before the vaccination programme.

Speaking this afternoon, Mr. Varadkar described the announcement that England was to lift many of its Covid-19 restrictions as “too risky” and he expressed concern about a spillover in Ireland.

UK Prime Minister Boris Johnson said yesterday that from 19 July it will no longer be a legal requirement that people have to wear masks in certain settings, with other restrictions such as on the size of events also to be lifted.

“What was announced in England yesterday was in my view too risky,” Varadkar said.

”The prospect of packed theatres in the West End and nightclubs in Manchester being packed to the rafters is one that would concern us quite frankly here in this country because if things go wrong in England it will have spillover effects in Ireland and on the other neighbours.”

Despite this, Varadkar added “The Delta wave is happening but it’s going to be different to other waves and that’s because of the vaccination program,” he said.

“I want to to reassure people, you will see cases rise dramatically over the next few weeks, but it’s not the same as it was back in the Alpha wave or last year.”

He added: “I want to reassure people, you will see cases rise dramatically over the next few weeks, but it’s not the same as it was back in the Alpha wave or last year.”

Varadkar said that the link between infections, hospitalisations and deaths has been “considerably weakened not broken” by vaccination and that this is what “really matters”.