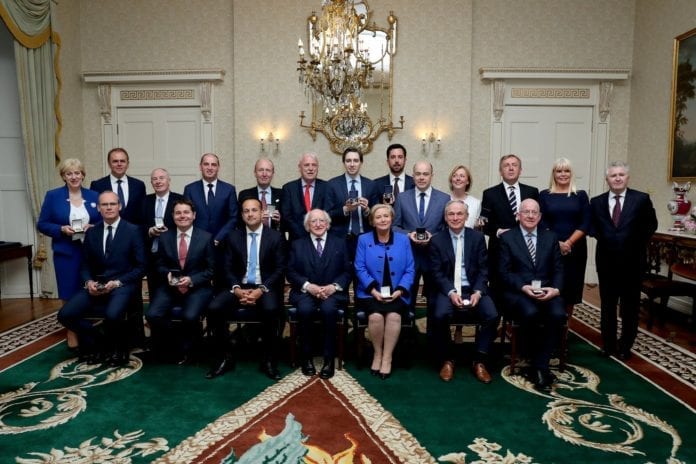 The post Taoiseach-election back scratching awards took place last night, after Leo Varadkar grabbed the top job in the country.

It was time to return the favours to those who supported him in the leadership challenge, and give them what they most coveted. Ministerial positions.

It was a difficult task for Varadker as many of the previous front bench had backed him, and there are sure to be a few disgruntled members this morning.

The new appointments sat around the big table at Aras an Uachtaráin as is tradition for a new cabinet, this was following on from President Higgins awarding Leo Varadkar with the Seal of Office

Taoiseach Varadkar's Cabinet meeting at #ÁrasAnUachtaráin tonight.
Every Government in the history of the State has met around this table. pic.twitter.com/ugM26tdF1i

The new line up is as such:

Simon Coveney, Varadkar’s former rival, is being kept in the cabinet and is moving to the Department of Foreign Affairs while Charlie Flanagan is to take over the ticking time bomb of the Department of Justice.

Paschal Donohoe is replacing the retiring Michael Noonan to become Finance Minister. Francis Fitzgerald is set to remain as Tanaiste but will move from Justice to the Department of Jobs and Enterprise.

Mayo TD Michael Ring and Dublin Bay South TD Eoghan Murphy have been promoted from the junior ranks to Minister for Rural Affairs and Minister for Housing respectively.

Donegal TD Joe McHugh is the new Government Chief Whip and will also be Minister for the Gaeltacht. He is replacing Regina Doherty as Chief Whip, who is now moving to Social Protection.
It’s not all changes though, as there are good few who have stayed in their old portfolio. Simon Harris has been reappointed as Health Minister, despite being the only Cabinet member to back Mr Coveney in the leadership battle.

Mr Varadkar only demoted one minister, Mary Mitchell O’Connor, who is now a “super” junior minister with responsibility for higher education, so will be working under Richard Bruton’s remit. The role of a Super Minister means that she can sit at the Cabinet table but no longer has voting rights.

Other junior minister who will sit at Cabinet are Paul Kehoe (Defence) and Independent TD Finian McGrath (Disabilities).

Some surprises has it was expected that John Paul Phelan would become whip, however he appears nowhere on the front bench. Another surprise for Damien English who was expected to get one of the top seats.

Promises To Improve Parking Services After Complaints Over Clampers