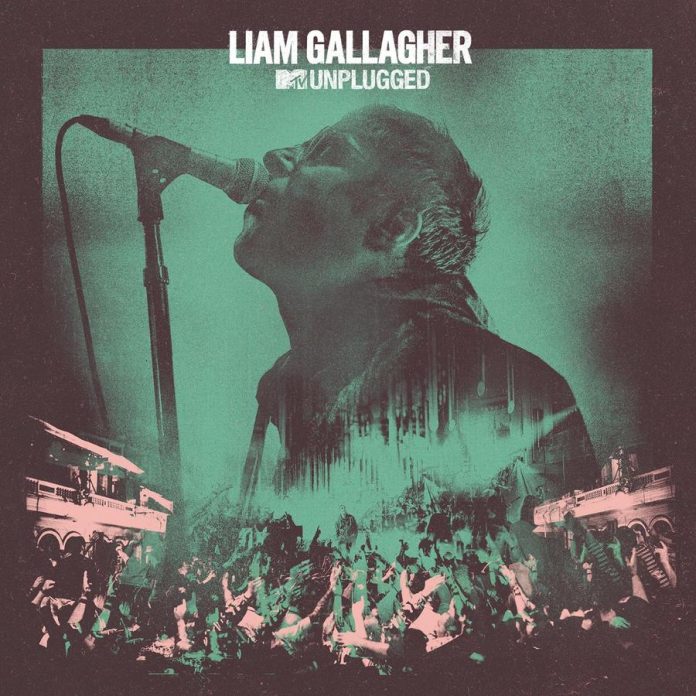 Having missed Oasis’s 1996 session through illness, the show at Hull’s City Hall found Liam fulfilling some unfinished business entirely on his own terms.

The news of the release was made during a live chat at YouTube this week.

“I was honoured to perform at the legendary showcase that is ‘MTV Unplugged’. It was a lovely experience and the people of Hull were biblical and sounded fantastic. I hope you enjoy the record. LG x”, Liam says.

A press release for the record says: The show’s electrifying atmosphere is palpable from the very beginning with a phenomenal reaction as Liam takes to the stage with ‘Wall of Glass’. Material from Liam’s solo career such as his personal favourite ‘Once’ and the joyous ‘Now That I’ve Found You’ resonates in this stripped-back format, with his vocal shining alongside a trio of backing singers and string arrangements performed by the 24-piece Urban Soul Orchestra.

Oasis guitarist Bonehead features on performances of ‘Some Might Say’, ‘Stand By Me’, ‘Cast No Shadow’ and Liam’s first ever live vocal performance of the ‘Definitely Maybe’ bonus track ‘Sad Song’. The show concludes on a crowd-pleasing high with an emotive take on the classic ‘Champagne Supernova’.

‘MTV Unplugged’ is now available to pre-order from www.liamgallagher.com.  It will be available on the following formats: CD, signed CD available exclusively from Amazon, standard vinyl, splattered vinyl and digitally. All pre-orders receive an instant download of ‘Gone’.

This summer will see Liam play a selection of huge outdoor shows and festival headline sets in the UK, which are listed below. Click here for a full list of his international tour dates.