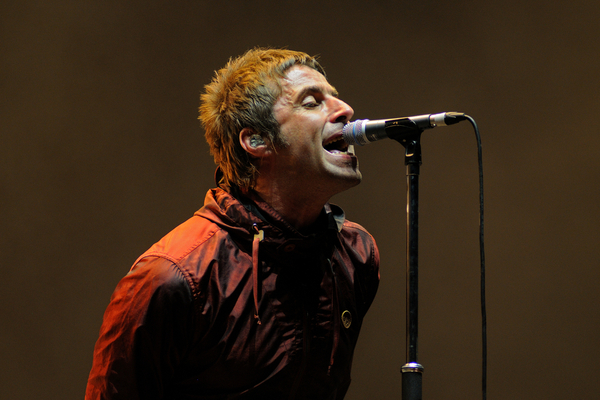 Dave Grohl has hailed Liam Gallagher as “one of the last remaining rockstars”. The pair had collaborated on Gallagher’s new single “Everything’s Electric”.

This song was co-written by Foos frontman Grohl, who also plays drums on the track. Greg Kurstin is the producer.

Dave Grohl spoke recently about Liam Gallagher, and how the track came about.

“Unfortunately we didn’t do it in person but I love being in the same room as Liam”, Grohl said.

“It’s like putting a fucking quarter in a juke box and just turning it up with that guy. It’s f*****g great. Obviously, he’s an amazing singer and he’s a f*****g rock star. He is one of the few last remaining rock stars”.

“He was making a song [‘Everything’s Electric’] with the producer Greg Kurstin and they needed a beat which I think was described as something ‘Sabotage’-esque [Beastie Boys] and so I fucking served it up”, he added.

“I served up the beats. And the f*****g single turned out great. I love that song I honestly do. I was dancing to it the other night”.

Gallagher had released that track which is included on his new album Cmon You Know. This album will arrive on May 27.

Speaking about the album last month, Liam Gallagher had claimed that “80 per cent” of the record is a “bit peculiar”.

“Some of it’s odd, man. I’d say 80 per cent of the record’s a bit peculiar, but still good. And 20 per cent of it’s kind of classic, like this”, Gallagher said of the album.

“I still sound normal and mega and all that”, he added. “But, you know, if you’re going to do something a little bit different, do it in these times, because if people don’t dig it, just blame it on COVID innit? And then we’ll go back to the normal stuff on the next record”. More on this here.

Liam Gallagher will also perform live at Kilmainham in August. More on this here.

Dave Grohl had been promoting Foo Fighters’ film Studio 666 which flopped at the opening weekend in North American theaters.